So yesterday wasn't so good.

I was feeling particularly lazy yesterday and so I just went with it. Hubby and I went and ran some errands in the morning and I just kind of lazed around the rest of the day, it was nice. I find that I need to do this maybe once every 2 weeks or so and it really reenergizes me.

So a little background here. My hubby has a Ford F-150. About 6 or 8 months ago Ford issued a warning that the cruise control system in F-150 has started some fires. Apparently the truck could be cold, just sitting there and suddenly a fire would start. Now a recall was never issued and Ford had no way to fix it. You were supposed to bring your truck into the dealer and they would disconnect the cruise control until they figured out a way to fix it. Well, hubby and I argued about this many, many times. He used his cruise control and did not want it disconnected. I of course got pissed because if his truck caught fire it's parked right next to my car. I'm sure you can see where this story is going.

So last night, around 6 p.m., we were cooking dinner and hubby is getting his stuff ready for the ProBowl today. He looks out the kitchen window to see flames leaping out of the hood of his truck. What ensued would have been funny if it wasn't so damn scary. He's running around grabbing the fire extinguishers trying to put the fire out but the extinguishers were either not working or he couldn't figure them out fast enough. Meanwhile, I'm running around trying to find a phone to call 911 and of course I can't find it. So hubby grabs the garden hose and starts hosing down the truck while I'm on the phone screaming to the 911 dispatcher that my truck is ON FIRE IN MY CARPORT!!!!!! It was at this point I suddenly realize that my car is still next to his truck. I scream at 911 to send the fire dept. and I need to go move my car.

My car is now safely out on the street and hubby appears to have the fire under control, but we can't get the hood open, and we are still waiting for the fire department. Now the closest fire station is 3.5 miles away. I pass it on my bike rides and it takes me like 5 minutes to get there (if that). It took the fire dept. 15 mins to get to my house!!! I really wanted to scream at them. What if we hadn't got the fire under control??? In 15 mins the carport could have been gone and the house involved. I was really pissed but I was relieved that they were there (does that make sense???).

They helped hubby cut the hood release cable (it had melted in the fire and wasn't working) and get the hood up. The engine is destroyed. After examining it, disconnecting the battery, hosing it down some more and making sure the fire was out, they took all our information and left.

Hubby is just devastated and me??? I'm trying very, very hard not to scream, I TOLD YOU SO!!! I'm just very thankful that it happened at 6 p.m. when we were awake and paying attention and not at 4 a.m. when everyone was sleeping.

Now, I don't know about most of you, but I don't pay a whole lot of attention to my insurance. When we got the truck 3 years ago I went over all the insurance details, chose the coverage, deductibles, etc. But since then I pretty much ignored it. I pay the premiums every 6 months and make sure my card is in my car and that's that...

So I call the insurance company last night and we go over what happened and get a claim going. The guy tells me this is covered under my Comprehensive coverage and there is a $2,000 deductible, WHAT????? Who the hell has a $2,000 deductible???? But, because it's a fire we had no control over the deductible is waived, yeah!!! After this is all over I will have to examine my policy more closely. I'll be damned if I'm paying all this insurance and then have a $2,000 deductible, that's crazy. Anyway, the truck is off to the dealer on Monday so a determination can be made if it's totaled or fixable. What a freakin' night!!!

What makes this so unreal is that every ProBowl something happens to hubby's truck. The first one right after he got it, the truck wouldn't start. Just wouldn't start at all. Turns out a computer chip went. The following year he went out in the morning and a tire was flat. Now this. I told him maybe he needs to stop going to the ProBowl.......

Anyway, today will be much, much better. I just finished breakfast and I'm going to head out on my bike in awhile. Here are some pictures to show how gorgeous it is here: 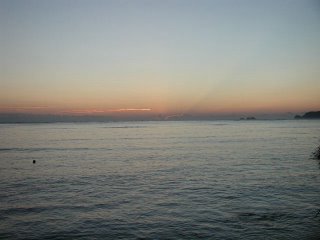 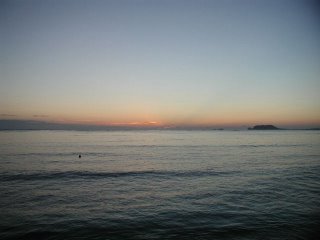 The sun is just starting to come up 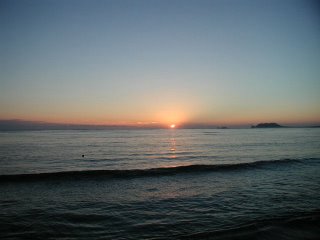 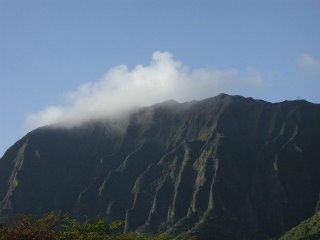 I love how the clouds get all wispy around the top of the mountains on nice days.
at February 12, 2006

I can see the headlines: "Ford issued a warning that the cruise control system in the F-150 has started some fires. What could possibly go wrong?"

Glad nobody was hurt!

Doesn't Ford face some liability in all this? Have you contacted them? Or will the insurance company have the honor of doing that?

Wow, so glad to hear nobody was hurt! I can just see it now... Ford/insurance won't cover it because they issued a warning and you didn't take it. Hope it all works out.

That's a large part of why I want to take it to the dealer. Ford should be responsible at least partially. Yes, we didn't get it disconnected but they never issued a recall. I think we are both to blame. If necessary, I'll just play dumb. What cruise control problem??? I have no idea what you're talking about!!!

Wow, what a mess. I'm glad things didn't turn out any worse. I'd definitely tell the DH no more Pro Bowl. And shame on Ford! A recall was definitely in order.

That urge to say "I told you so" can be sooooo overwhelming! I'm glad that everything (except the truck) is okay. It seems very strange to me that it can just be sitting there and catch fire. That's scary!

That's AWFUL! Ford should do more for you than NOTHING. No recall? People DIE when trucks catch fire. No recall??????? I think CLASS ACTION suit here.

My VW Beetle has a (much) smaller problem. The door windows have a tendency to "fail". That means when you are sittting there, all of a sudden, you may hear a horrible shattering noise and the glass of the window drops down into the car door and smashes. Crunch. No window. VW won't fix then before it happens, but they will fix them for free if it does happen within 5 years of purchase. Well, it happened to the driver's side window. Luckily, I was in a parking lot at a furniture store, & my husband was there WITH me WITH his car. I'd had an audition in Baltimore, so we'd met at the store. Otherwise, I'd have been out on the road alone with no window on the driver's side. If I'd still been in downtown Baltimore, I wouldn't have been able to leave the car and expect to find anything left inside it after my audition. (Baltimore is a CITY, right? In NYC or DC, it would've been the same deal. I don't know about "the country" or the suburbs...but I have my doubts about the goodness of human nature there, too.)

Anyway, long story long - I am now just waiting waiting to see if the OTHER window "fails" before the 5-year free-fix time is over. And hoping if it does happen, it's not the middle of winter, or on the DC Beltway at zoom-zoom-zoom miles per hour.

And another week goes by

In the blink of an eye. To rehash this week:  Hubby had been doing good, slowly getting better Then on Wednesday he seemed to suddenly get ...