It's all about the bike.

This morning was a bike ride. Now this ride was exciting for a number of reasons. First, it's the first morning ride since last September. We don't have a very long winter here (though this year was longer than normal) but we do have a couple of months where it's too dark in the morning to ride. For the last couple of weeks it's been getting lighter and lighter. Well, this morning was the first official ride. WooHoo!! Second, I rode around the backroads of my new neighborhood and it was totally fun. The entire area backs up to the mountains, so the views are spectacular, and it is primarily flower farms, so it's pretty and smells good. Yeah!!!! Thirdly, where I live I can literally ride from the mountains down to the ocean and back home again in under an hour. Sweet!!!!
The numbers: 9.33 miles in 50 minutes. Just cruising, keeping the heartrate down. A really great morning.

I've found this website that I really like. It's Ontri.com. They have training programs and logs and goals and stuff, it's fun. I'm using their sprint training program aiming for my July 2nd tri. It's fun and the workouts aren't too difficult. I just like the whole setup.

So I've been trying to get the eating under control. I started trying to stick to Core on Saturday but, after weeks of eating badly, I was having a really hard time. I decided to go back to basics.(hmmm, is that a theme around here???). For this entire week I have been recording every single thing that goes in my mouth. I have not been keeping points/core or calories, I've just been journaling. It's working, I'm starting to get a handle on my eating. One thing that happens when I don't eat right is I stop getting hungry. I continue to eat but I'm not really hungry. This morning I woke up starving and realized things are turning around. So, Yeah!!!!!!!!

One thing I do really enjoy is dessert. I grew up with a mom that was constantly baking so dessert is something I really look forward to. Well, a couple of months age hubby and I found this: 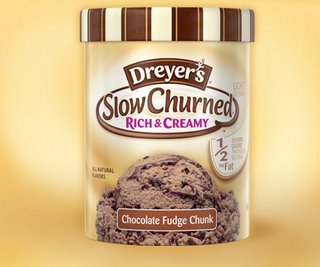 This stuff comes in a variety of flavors and has 1/2 the fat of regular ice cream. A small scoop of this at night while watching TV is just perfect and the calories aren't too high. So that's what we've been doing. Then, a week or so ago, I went to the store near our new house and they don't carry this. I figured I'd just get something else and it would be fine. Well, I ended up with this:

This stuff is pure evil. It has swirls of chocolate and peanut butter; chocolate covered peanuts and

chocolate rabbits filled with peanut butter. Oh my god!!!! I literally could not stop eating this. I actually heard it calling my name from the freezer. It was horrible. Thankfully, hubby and I finished it off last night and the law was laid down; NO MORE BUNNY TRACKS!!!!!!

Okay, so that is over, thank god.

I had some really sweet victories that just flew right by unnoticed. Tuesday was a rest day and I just took Tuesday. I didn't stretch it out for 2, 3, 7 days I just took 1. Yeah for me!!!! Also, I didn't use the rest day as an excuse to eat junk all day. That is a huge problem I have. I've been battling it for years and I'm not sure how to combat it. Take a day off and eat like there's no tomorrow. So overall it's shaping up to be a spectacular week.

Good for you Flo! I've seen that slow-churned Dreyers at the store, but never looked close enough to realize it was low fat. I'll have to get some. My total favorite is Breyers Chocolate, or Starbucks Coffee - I'm sure both are really bad in the fat/calories department! The other good thing our local grocery carries is Dove sampler packs - little tiny dove ice cream bars - 60 calories a pop. I love those and try to eat them instead of buying scoop-able ice cream. It helps me control myself.

2 weeks ago, Hubby got bit by our dog. There was a fight between the neighbors dog and ours and he stuck his hand in, like he always does, ...