Today is much, much better. 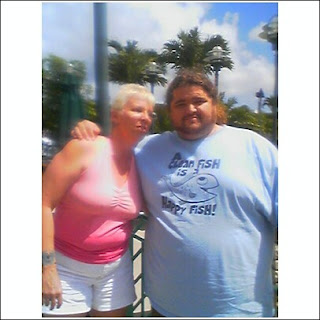 Wow, yesterday was tough. I will never eat that much bread in one day again. Not only did my insides writhe in pain all day, I felt all bloated and puffy. Yeah, don't like that feeling at all.

So I forgot to tell you about my brush with fame. Saturday we were having lunch at Chili's and I look up and who's walking out the door?? The guy who plays Hurley on Lost. I grabbed my phone, jumped up and quick got a picture taken with him. Right at this moment Blogger won't let me upload it. I'll try later. Anyway, he was very nice and appeared to be painfully shy. I kind of felt sorry for him.

So this morning was weights. I was lying in bed and I thought, "It's not that hard to get up in morning, but it's really easy not to." I like that and I'm going to have to remember it.

So it was weight day and they felt pretty good. There is this one move where I lay on the bench, raise the dumbbells straight up then lower them behind my head and back up. It works the lats and side. My right side always hurts way more than my left when doing that move. Even now, I can feel my lat on my right side. I hope there's nothing wrong.

Yikes! Those lat-pullovers can be brutal! I hope the soreness goes away super quick!!

That's is SO awesome about your brush with fame!! Can't wait to see a picture!

That is a tough workout. I used to do those too. Can't seem to manage those yet. But when I did, I noticed how effective they were. You are probably stronger on one side.

Awww... Hurley is my favourite in LOST! Ok, don't forget to tell him that he has a BIG fan in Turkey! :D