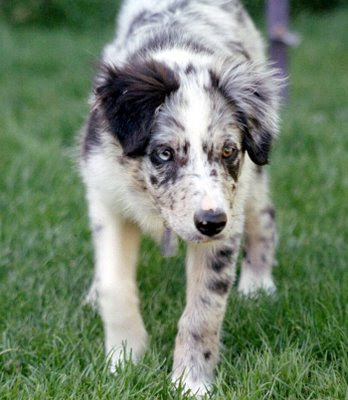 The sun was just starting to peek over the horizon. The road I was on is bordered by lots and lots of trees and there were patches of very dark shadow. I didn't see the dog till I was almost on top of him. He was standing partially in the shadow of huge tree and with his coloring blended in perfectly. When I did spot him I wasn't too concerned, I run into dogs all the time at this hour on this road. Most just look at me and go back to their business. This one was different. I noticed that his head was low, even with his back. Not good. I then noticed that his tail was lowered. Definitely not good. Then I noticed the eyes. They were locked on me and nothing was going to break his concentration. Realizing that this was a Border Collie and their instinct was to herd things and I was moving at a rapid rate made me a little nervous about the next few minutes. I had visions of a dog entangled in my wheels as he tried to nip them to herd them. This was not going to be good. I was going too fast and was too close to the dog to stop or change directions. As I got with 10 feet of him I could hear the growl emanating from deep in his throat. Oh My!!! Then I saw his shoulder muscles bunch up and I realized he was getting ready to launch himself at me. Definitely not good. I did the only thing I could think of. I yelled "NO" in a loud, deep, commanding voice. It worked. The dog didn't move a muscle and I went flying by. But for a few minutes it sure had me scared.
at July 24, 2008

Whew! Glad that had a happy ending :)

That would have scared me, too! Ever consider pepper spray?

Wow! I'm impressed! I would have been freaking out and not kept my wits to be able to think quickly like that.

I visited your blog. It is very nice and informatics post. So thanks for sharing this information.