Whew, what a day. 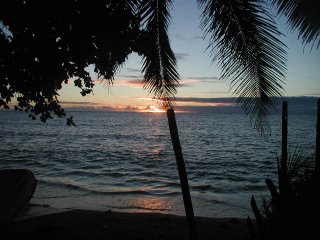 First off it was an absolute gorgeous day. The nicest one we've had in a month (okay, I was gone 2 weeks but you get the idea). So I decided to go for a bike ride this morning. 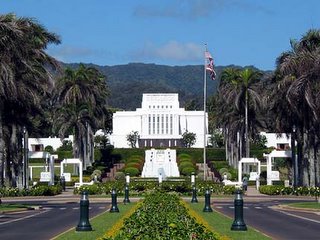 I decided to do 2 hours and not push it, just enjoy the ride. Boy did I!!! I ended up riding up to Laie. You may not know this but Hawaii is home to the largest Mormon Temple and mormon population outside of Utah. It's absolutely true!!! So I rode to the Mormon Temple in Laie; they had redone the roads leading in and I hadn't seen it yet. It really is beautiful. Although I'm not Mormon I can certainly appreciate a beautiful temple.


After I got back home it was just too beautiful and I decided it was a good time to go for a swim. I was entering the water, and it was cold so I was going a slow, when I stopped to put my goggles on. I'm standing there contemplating the cold of the ocean and realizing that mainland bloggers swim in cold pools and stuff all winter. I had just about convinced myself what a wimp I was being and I was preparing to dive in when suddenly I felt something bite my little toe. 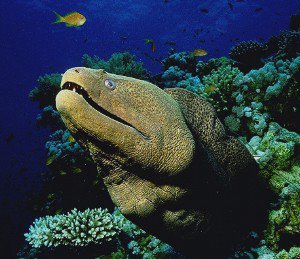 Apparently I had been standing a little too close to the home of a moray eel and he decided I needed an invitation to leave. Although not poisonous or anything, that bugger hurt like crazy. Their teeth are like needles so there are 4 clean holes in my toe, 2 on top and 2 on bottom. Needless to say I got out of the water pretty quick and was afraid to get back in. So much for my swim.

After showering and going to work for a little while, I stopped and signed up at the YMCA. Rumor has it there are no eels in their pool :)
at January 15, 2006

You realize when you're talking about "nice" days and "cold" days those of us reading from the mainland in the grips of winter are rolling our eyes here....

mental calmness, composure, and evenness of temper, especially in a difficult situation. This is something I strive for in my life in genera...