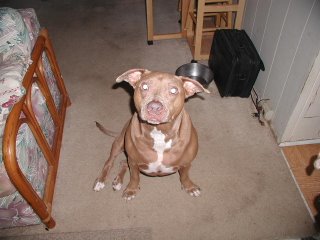 May I introduce the 1 million dollar dog. She is also known as Nala.

Nala was born with bad knees. When she was 1 year old we had to have her right knee cap anchored because it didn't track properly. At that time we were told she would probably need her other knee done in the near future.

7 years passed and there was no indication of problems with either knee. I thought we had lucked out.

In January her left knee started bothering her. We were told she may have a partially ruptured ACL. A 10 day supply of Rimydal and she was her old self again. Life moved on.

The weekend before July 4th she couldn't walk on her right leg. It was so bad and continued so we took her to the vet. $200 later we didn't know anything. Her knee cap is thickened indicating severe arthritis and there may be some ACL involvement on that side also. The recommendation; see the orthopedist.

Last night was the orthopedist. He examined her thoroughly. Said there is lots of arthritis in both knees. Impossible to determine if it's an ACL problem. She's a Pit Bull, hence so strong they can not manipulate her knee to find out if the ACL is working properly. $200 later, we still don't know anything. Recommendation; bring her in for the day. She can be sedated, x-rayed and ACL checked. Cost: $300 - 400.

The ortho pointed out a couple of things I had never noted. Her rear legs are unusually straight. If you look at dogs their back legs are always bent; not hers. She walks almost like a human. Also, her chest and shoulders are huge. She's not one of those pits with the huge head, so her shoulders always struck me as being weird because they are so large. Turns out she's been compensating for her weak back legs all her life. Her front takes most of the weight so she's developed these huge shoulders to carry her. Weird, huh??

I love my dogs like they are my kids. There's no question of doing whatever we can to help her, she's only 8. But man, it's always something. We were just putting some money away so we can buy a house. We were just getting all the bills paid off and the credit card debt put to bed. Oh god, now this.

Okay, I'm not whining I just needed to get this off my chest. Mainly I don't want her to have to go through all this. She gets so incredibly nervous whenever we go to the vet. I hate to keep taking her there. If she has to have surgery keeping her down for days will be a huge challenge. I just want her to be all better.

What is important to me

I need to figure out exactly what is important to me and what I really want. I know I've done this before, recently, but we are now ba...