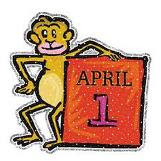 Don't know why April Fool's Day even exists. Don't know why people would put aside an entire day to play practical jokes on people. Weird. I enjoy a good joke but the best ones are usually spontaneous, something that occurs to you right on the spot. Things that are planned generally don't go as expected. So I'll pass on the whole practical joke thing today thank you.

I didn't work out this morning because I went to the doctor. I had ear pain for a couple of days, then yesterday the pain started to spread down my neck and there is a little pain when I swallow. Since school starts again on Monday, I don't want to get sick over the weekend, so I went to the doc. Ummm, yeah....do I feel stupid. Turns out it's a muscle in my neck. Which, when I think about it, makes total sense since my neck and upper back were bothering me last week. So there is nothing wrong with my ear, yea!!! However, when I mentioned how I had been sick on and off since December, he pressed on my face (that sounds great) and there is a little pain on the left side. He said I may have a sinus infection and prescribed some antibiotics. Now I am not one to take antibiotics unless it's something dreadful and prescribing them because I might have a sinus infection generally goes against my beliefs, but this time I've decided to take them. I have not felt completely well since December and I have a feeling something is lingering that antibiotics just might help. So we'll see I guess.

That's really all. Except some people that have annoyed me. Someone wanted to come over today to see my birds. They want to get one and just wanted to see mine. I knew I would be home all day so I said okay. Also, I have another friend who lives nearby who might actually have a bird available and I was going to take them over there too. So we talked yesterday and everyone was all hot to come over and they are the ones that suggested today and everything. So I call them this morning when I got home and let them know I was home and would be for the rest of the day and they acted like they didn't know what I was talking about. Like I was the one pushing them to come over today. Huh??? Weird. At this point they may never come over to meet my birds, lord knows I'm not making plans with them anymore.....
at April 01, 2011