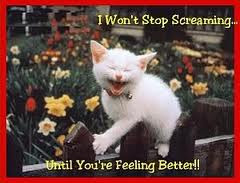 It's been a slow recovery, but I am feeling better. This cold came on like gang busters. Thursday I felt like I had s slight headcold, by Friday I was stuffed up, coughing, and sick as a dog. I felt like absolute crap for 5 days and spent most of those days in bed. By Tuesday I was done with being sick and went back to school. Tuesday and Wednesday were brutal. By afternoon my voice was shot and the almost constant coughing was annoying. Yesterday was much better and today is even better. I just want to be done with this and feel like myself again. I want to start exercising again. I want to have my appetite back and start eating normal again.

Being at home and watching so much TV, I have seen some really weird stuff. Lots and lots of lawyers advertise on TV. I don't think that's good but I can't say exactly why outside of the obvious. I see a lot of commercials for products we don't need at all and that bothers me. A. Lot. I've also seen some useful stuff, some of the as seen on TV stuff looks really interesting. Things like costume kingdom coupons can come in handy for families with kids. It's just amazing what you see when you watch a lot. Hopefully I won't be watching as much anymore....
at November 11, 2011