I don't want to be lazy 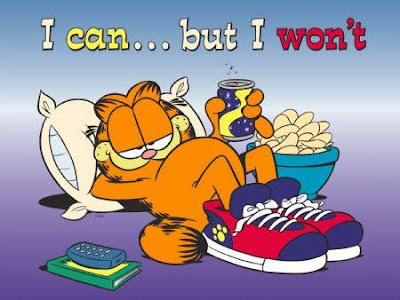 For most of my life I have considered myself lazy. Honestly, I think this came from my brothers. When I was little they used to call me lazy, they used to call me a lot of things but for some reason I think that one stuck. I also have a habit of saying I'm lazy. Well, I don't want to be lazy. I want to be active and organized - I'm also not very organized. The thing about the lazy part is that I think I undermine myself. For example; I ride the bus to and from work. I ride my bike to the bus stop, then catch a bus over the hill. Okay, I have been going to a bus stop that is 4 blocks from my house. Close and convenient. That bus ride took almost an hour. I would get off and ride to work. Most days I would get to work at 7am, but there were some days that I wouldn't get there until 7:15 or 7:20. I don't like to be rushed in the mornings and if I had an 8am class, getting there at 7:20 is too close. But honestly I fell into a rut of catching that bus and getting to work at that time. Then the other day Hubby drove me to work and we spotted a bus on the freeway considerably earlier then my bus. Hmmm... a cursory investigation didn't turn up what bus that could have been so I dropped it. Lazy. Then yesterday morning something got into me and I decided I needed to find that bus. I went online to the bus website and found out what one it was. Turns out this bus picks up a couple of minutes earlier then my bus and it's about 1/4 mile away. That means I would have to leave my house 5-10 minutes earlier. I took the new bus on Friday and I got to school at 6:30am. Awesome!!! That is what I like. I had everything ready and I had breakfast well before my 8am class. Awesome. Then there is the bus ride home. I can catch a bus that drops me 2 blocks from my house - but that bus only runs every half hour. Or I could catch 3 different buses that would drop me 3 miles from my house. Hello - I have my bike and 3 miles is nothing, yet I still wish for the bus that goes by my house and there are days I'm tempted to wait for it. Finally, the bus stop I choose on the way home makes a huge difference. I have been riding down to Ala Moana blvd and catching a bus not far from where it starts. But that stop limits my choices of buses since not all buses stop there. I found that by riding downtown and catching a bus on the Pali, about 4 miles from school, I almost consistently catch and earlier bus and get home earlier.

There is only 3 weeks left of school, so my vow for the next 3 weeks is:

Now the organization thing. I hate being disorganized. I want to have things neat and organized and know what I'm doing and where everything is. So I need to start working on that too. Not sure my gameplan for that but I'm going to figure it out.
at May 12, 2012