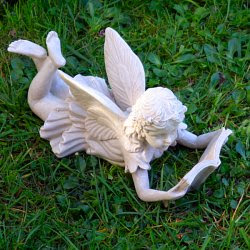 This is how I spent most of yesterday. Reading. I was reading a rather terrible book that was oddly captivating and I just could not put it down. It was very badly written, the plot lines were right out of a how-to write book, and the characters were stereotypical. But for some reason I had to finish it and know how it ended. And I must say, it did not end as I thought it would. Of course my ending would have been much, much better but what I can I do?

In spite of that, it was a very good day. It was really and honestly the first day in 2 years that I did not have my thesis lingering somewhere in the back of my mind. I picked up my bound copies on Friday so it is done and just waiting to be signed. I am ecstatic!!! So yesterday was my first real and true day of rest in a long, long time. And it felt really, really good. I did eat really well and that made all the difference. I had oatmeal for breakfast, a huge salad for lunch and little steak for dinner. I also ate a lot of fruit during the day and that was awesome.

So now I'm trying to figure out what to do today. I have a bit of a quandary on my hands. I have a bunch of stuff that needs to be transported up to school because school is going to start soon. The only day I can use the truck is Tuesday. That's a little earlier then I planned and I won't have everything done that I wanted to have done. So now, do I work hard today and tomorrow to get as much done as possible or do I just go with what I have and hope for the best? As I was typing this out I decided, I need to get more done. Especially with Marine Science. I need to read up and plan that out a little more...