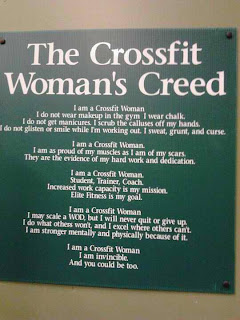 Yesterday morning I hopped on my bike and toddled off to CrossFit. I've heard about CrossFit for years. I've read their blogs, seen their workout of the day, I've even done workouts similar to CrossFit, and I thought I was prepared. Well, I was wrong. Very, very wrong.

I got there early because I wanted to see the regular class in action. I got there just as their workout was ending. Every one of them was gasping for air and sweating like a pig. There were puddles of sweat everywhere and every surface was covered in sweat. Wow, this looks like fun. Then they finished up with 1 minute of sit-ups. Yikes!!!!

By this time others were coming in for the intro class, good, I wasn't going to be alone. 10 o'clock rolled around and the guy got started. First he introduced us to some of the moves we would be doing. We all got jump-ropes and he showed us a couple of ways to jump. I couldn't do all of them, especially the double under.

Then he showed up some squats. Now the way he showed us squats kind of goes against everything I've ever been told about squats. He wanted us to bring our butt below the level of our knee. I've always been told that going below the level of your knee will hurt your knees and with my bad knee I was a little nervous. Well guess what? It didn't hurt my knee at all. Huh, who knew??? Then we added weights. We did a squat with the weight in one hand and as we rose from the squat we shot the arm up overhead.

Next it was push-ups. I have a love/hate relationship with push-ups. I hate them with a passion but when I get strong enough to actually do one, I love how I feel when I'm done. Never do I love the push-up. He showed us a couple of variations; knees, on a raised platform, etc. Then he showed up one variation where you took a heavy band and attached it to a high bar. Then you ran another band through it and made like a harness that you put your arms through. This helped you do the push-up because the bands are pulling you up at the shoulders where you need the help. I did those.

After all this, he explained what the workout would be. We would do 7 push-ups, 10 squat-thrust, 25 single under jump rope. As many circuits as we can in 7 minutes. Annnnnd go!!!!! Yikes.

I started off okay and the first round went fine. By the second round I was starting to feel it in the push-ups. By the third round I was slowing down considerably and for the last few push-ups had to drop to my knees even with the bands to help. The fourth round was absolutely brutal. I was panting like a dog in the heat and sweating buckets and buckets. Then I started the fifth round with the push-ups and he called time. Oh, thank god!!!

We then had to write how many rounds we completed on the board. Almost everyone completed 5 and I only completed 4. At first this kind of bugged me, but once I thought about it I realized that is as it should be. I was the oldest, most overweight person there. I should be the slowest. Also, I will probably make the greatest improvements the fastest :) I enjoyed the workout so much, I signed up on the spot for 1 month. The first month, or 8 classes, is to learn everything. They show you all the moves, you figure out your weights, and you just get used to doing CrossFit. So I committed to that. I'll give it a month. I think I'm going to like it though.

By last night I was starting to feel the beginnings of DOMS - delayed onset muscle soreness. When I woke up this morning I could really feel it. It's not really that bad, but considering I only did a 7 minute workout??? It's horrible!!!! So I'm trying to decide if I want to run today or not. I may just jump on the treadmill and see what happens. I can always just walk for a bit and call it a day. I don't know. What I do know is that it hurts so good.
at September 02, 2012