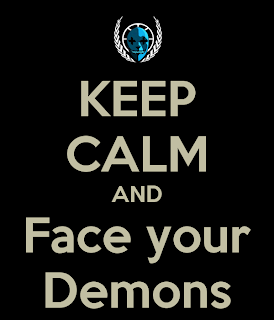 Today was one of those days. I walked into Crossfit and saw the WOD on the board. The strength portion was max power snatch or power clean. Last week I did a lot of cleans, so many that my collar bones were a little sore. Those were out. That left snatchs. Back in April, I hurt my shoulder on a snatch. It's kind of been my nemesis ever since. I've done them, but I've always gone into it with fear and apprehension. Today I said, no way. I am going to own those snatches. I did not go crazy though. I started with the 30# bar. I did a few with those, then add 2-5# plates. I did a few with those and it was all good. Then I added two more 5# plates. I got a few of those even though it was beginning to get heavy. Next I added two 2.5# plates. I could not do the first one. I walked it off and tried again. I got the second one. I rested and tried again and screwed the lift up. Walked it off, tried again. This time I felt a little tweak in my shoulder. I walked it off and tried just one more time. I got it, no shoulder tweak, but it was kind of ugly. But I did it. I faced the demon and I conquered it.

The WOD then consisted of a choice between dips or push ups. I initially chose dips. I'm not sure why, I think I was avoiding the push ups. I did the first 2 rounds with dips but those push ups were screaming at me, so I got some bands out and switched to push ups. The push ups that almost defeated me the other day? I did them perfectly. Every single one. Only a few were really, really hard. Most of them were just hard. I ended up doing 42 of those bad boys. I was pretty darn proud of myself. We also had knees to elbows and that bothered my shoulder a little bit, but not too badly. Afterward I had Andrew wrap my shoulder and that helped a bit. Now I'm going to shower and put some cryoderm on it.

This was all a huge success today, but more important is the change in my attitude. Not only did I not complain when I saw the strength and the WOD, I decided to make those moves my bitch. Also, the dips were hard and I probably needed work on them, but I wanted to do those push ups. I really, really wanted to do those push ups. That is so weird for me. The truth is, it's not weird for me. Not at all. I generally want to do things I'm not good at just because I'm not good at them. But in fitness it's a little different. I tend to cave when it comes to fitness. So I'm extremely excited about this attitude and I want to keep it. I like it.