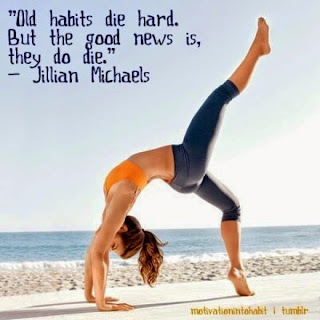 I have kicked some nasty habits in my time. I quit drugs. I quit smoking. I quit binge eating. Yes, some are worse than others but they were all just habits that I needed to change. Quitting drugs and smoking was tough, but honestly not as bad as beating binge eating. I could make sure that I didn't have drugs or cigarettes around, but there was always food in the house. And binge eating was a very unconscious thing. Smoking was unconscious also, but with no cigarettes around it wasn't an issue. So binge eating was my toughest habit to kick so far. At first I did it so unconsciously that I did not even realize it was happening until it was over. When I decided it needed to go, I started to notice it as it was happening. I still couldn't stop it, but at least I was aware it was happening. Over time I gradually started to notice it earlier and earlier. Eventually I was able to notice it before I did it and was able to stop it. Now I haven't had a binge episode in years. I have eaten more than I should, but never a binge.

Well, when I realized a couple of weeks ago the self imposed stress I was under, I also realized that it was tied to my lack of activity and crappy eating. I've been working to clean up both, but it hasn't been perfect. This weekend I had a huge project due for one of my classes. I knew this project was due, I've known for 10 weeks that it was due. I was supposed to have been working on it for the past 10 weeks. Have I been? NO. I finally started working on it this week and really started to cram it last night. I've spent the entire day working on this project and I finally turned it in about an hour ago. It is not my best work by far, but it is what it is. What I noticed though is that my eating has been pretty bad since about Wednesday. As I got closer and closer to the deadline, my eating deteriorated. On Friday night, I felt like pasta so I got mac and cheese and cookies and ice cream and I ate them all. Yesterday I had to proctor in the morning and I ate crap for breakfast and snacks and came home and had cookies for lunch. I had a pretty decent dinner because by the time I was starting to tackle this project. My eating was directly tied to my stress over this project. Directly!!!! I sat here this morning munching on Cheetos and that was when I realized it. I said to myself, "I don't even really like these" and then replied "It's because of this stupid video" and it hit. That's what was going on. I bet that if I tracked my eating compared to my stress levels I would find a direct correlation.

My post last night was a direct result of not making the connection. But now I have made a connection and knowledge is power. I am going to do a couple of things this week. First I will track my food and make note of my stress levels. I will record the things that are eating at me and the things I am eating. I will also try very, very hard to reduce those stress levels. I will do some work every night, because I have a huge project due next Saturday. I have some money concerns but I have some work arounds, so no need to stress over that. Everything else is good. I just need to be aware. Awareness is the first thing. Once I'm aware, then I can change behaviors.

So I'm feeling much better today. I have completed my assignments and I've made a breakthrough in my eating habits. I'm very happy. This week I will work on both. Knowledge really is power and now that I have the knowledge, I have the power to change.
at November 09, 2014