and 2015 is ready to begin. I know that these are arbitrary days we humans have chosen, but I love new beginnings. I used to make a fairly big deal about the new year, but the past couple of years I've let things weigh me down. But not this year. This year I'm excited about the new year and eager for it to begin. It is going to be a good year.

One thing that has brought on this positive attitude, is Crossfit. I have been doing Crossfit for 3 1/2 years now and this year was tough. Really tough. I felt like I was not making progress. It seemed I had injuries all the time. I finally admitted that I cannot run or jump anymore. I really felt like I was getting old and even Crossfit wasn't going to stop that. But the last couple of weeks I've had some major successes in Crossfit and it has highlighted the fact that I am getting much, much stronger.

First was the sore lats. Last week we did some negative pull-ups. I can't do them well, but I was able to lower a little bit slower than a straight drop. The next two days my lats were so sore. That set off something in my brain. Prior to that I could not even really activate my lats for a pull-up. So the fact that I can now engage them tells me I am getting stronger. Then on Christmas day we did the 12 days of Crossfit. Last year I did it in 36:13, this year in 34:00. That is a 2 minutes and 13 second improvement. Wow. Then last Sunday, the weekend warrior was to row 5000 meters. I did it just to see if I could do it. And I did. I did it in 31:38. Wow. That's freaking amazing. Finally today. New Year's Eve is traditionally the 365 workout. There are nine moves. We can do as many of each move as we like, but we must do at least one and the total must equal 365. The nine moves are:

Last year I could not finish this workout. I stopped at 30 minutes and did not finish the burpees and the push press. This year, I was determined to do it. I broke it up somewhat evenly. I originally was going to do 40 of each, but then I realized there was no way I was doing 40 burpees or 40 lunges, but I could do 100's of sit-ups. So this is how I broke it up. I ended up finishing it in 29:32! Woot!! Not only did I finish it this year, I beat my 30 minute cut-off from last year.

So these few things the past couple of weeks had made me realize that I need to focus on the positive and not the negative. So starting tomorrow, I'm going to do this: 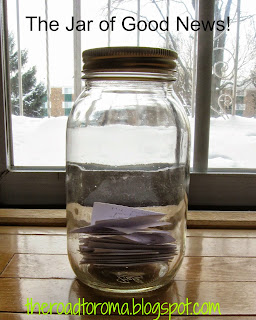 So I'm looking forward to the new year. it's going to be a great year!!!!