The other day I posted that I wanted to burn 3000 calories a day according to my Garmin. On Friday, I was just going to just see how much I burned and then on Saturday I was going to really try for 3000. Okay, not as easy as it sounds. Here are some screenshots. 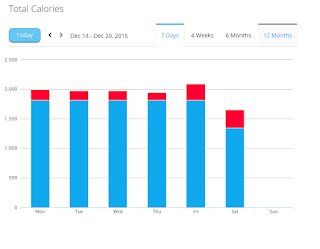 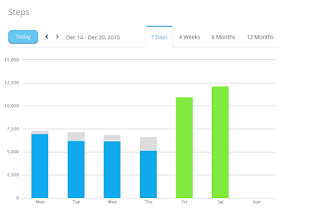 This one is the number of steps. Notice that Saturday had the most number of steps for the week, and yet Friday had the highest total calories. Huh????  Saturday I went to Crossfit in the morning. I know that the Garmin doesn't register Crossfit correctly, but this is crazy. So, I still want to try to reach a certain number of calories burned per day, but I think I need to work up to 3000. Also, clearly I need to walk more.

Yesterday, Saturday, was a most exhausting day. I returned to Crossfit and while it was awesome, it near about killed me. The WOD was:

Also, the strength was floor press. I was really afraid that returning, I would be really weak. But I got 90# on the floor press, so it's not as bad as I thought it would be.

As soon as I got home, Hubby was ready to go to Costco. So it was in the shower, and off to Costco. We had a hot dog before going in, thankfully because I was hungry. Then walked around Costco for an hour. On the way home we stopped at the grocery store for the weeks supplies. After that I laid on the couch and passed out for an hour. I was tired. I woke up and was hungry. We had some poke and I had some salami and cheese, then it was time to walk the dogs. 3 dogs, 3 walks. I had developed a pain in my left heel. I was afraid it was plantar flaring up in that foot now, but I don't think so. It was like my achilles tendon was pulled. I stretched and used my Cryoderm on it a couple of times. It feels pretty okay this morning, I'm just glad I'm not doing Crossfit today. Then it was time for dinner, clean up, and off to bed. I was exhausted.

I didn't sleep very well last night. Between the really strong gusts of wind waking me up and the dogs stealing my blankets, I did not sleep very well last night at all. Plus, I am sore. I knew that was going to happen and it has. I'm not as sore as I thought I would be, but it is early. There is a mobility clinic today and I'm on the fence about going. Maybe I will, I don't know.