Back to our regularly scheduled ramblings..... 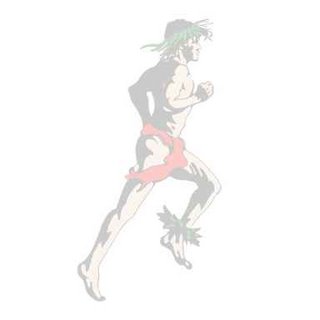 Okay, it's 3 days and I'm starting to get excited. That guy on the left is the logo of the Honolulu Marathon. He's called the King's Runner and every year there is someone who runs the marathon dressed liked that. It's fun to run behind him ;).

Last night the group went out to dinner as it was our last time together and we had such fun. This was a really great group to train with and we are already planning our next adventure. The Volcano Wilderness run is run on the big island of Hawaii and it goes through the volcano. You actually run in the caldera of the volcano; how cool is that? It's know as the world toughest marathon because the lava fields are like running over glass. If you fall it will cut you bad. So that's what we are looking at. A group of us girls (sans husbands) will rent a cabin and spend the weekend - it sounds like fun.

So I'm getting really excited; still nervous, but really excited. This morning when I was walking the dogs I saw a film crew filming the sunrise in the park next to my house. I asked what they were doing and they said it was for the Honolulu Marathon DVD. Then I saw folks taking photos along the roads (they had big ole honking cameras so I know they weren't tourists) who I figure were taking "background" shots. I can't wait for Saturday when I get to go to the expo. It's all too exciting.

oh, countdown is on, T-3, wishing you luck, and good running!!

Good luck to you! Take many pictures.

Time for a little navel gazing.....

One of the things I miss about writing in this blog is the navel gazing aspect. I worked a whole lot of things out just by writing here a...