Well, here it is Tuesday and things are going well. I think I have found a WW meeting I like. The Monday night meeting right near the lab has a leader I really like and the group seems lively. I'm going to try it for a couple of weeks and if it still fits transfer there.

Exercise has been going well. Sunday I went on an hour bike ride. It was a picture perfect morning and I realize that I now live in an unbelievable place to bike. The back roads around my house are full of flower farms and smell incredible right now. The main road leads to one of the most scenic places on Oahu. This is the coast that I live along, Hello, pretty sweet biking. 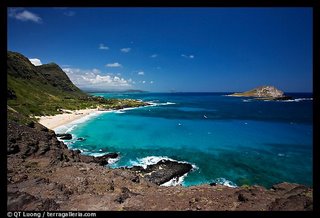 I rode along this coast up to Sea Life Park.

Sea Life Park is the home of the Wholphin. A cross between a whale and a dolphin. In fact, they just had a wholphin baby. Generally crosses like that are sterile but the wholphin bred with a dolphin and they had a baby.


So yeah, I'm happier and happier with my new place. Now if the ocean would just clean up so we could go into it......


On the eating front, things have not been great but they have been better. Sunday I did awesome all day then for dinner I caved. If you've never been to Hawaii we have a unique thing here called a plate lunch (it's called lunch whether it's for dinner or lunch or snack). This consists of meat, generally fried or covered in gravy, white rice, and macaroni salad (heavy on the mayo). The only thing resembling a veggie is the shredded cabbage they lay the meat on. Hubby came home from work Sunday and really wanted a plate lunch for dinner, and I caved. At least I got the BBQ Chicken which is neither fried nor covered in gravy. But I did eat the mac salad.

Yesterday was much better. I only had ice cream for dessert and that was only to finish it up so it won't be tempting me anymore :)

So I am down a little. It's a start at least. And I am totally stealing Mipper's idea about a daily question:

What have I done today to further my weight loss??????

Think of it this way - you balanced out Sunday with the plate lunch and the good eating. If you had eaten poorly all day, then had the bad dinner, you'da been sunk. But no! You were good all day and achieved balance. Nice job.