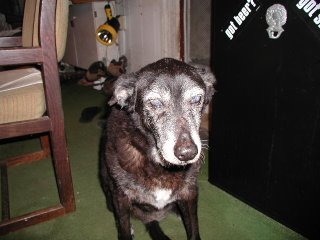 At approximately 7:45 this morning (just about 1 hour ago) Mana was put to sleep. She was 15 years old and just the best dog in the world.

We got her 15 years ago this past April, from the Hawaiian Humane Society. She was 12 weeks old when we adopted her so I always figured her birthday was in January.

When she was about 4 years old I found myself partially unemployed. I only worked about 2 days a week so this left a lot of time for playing. Me and a friend (who was also semi-employed) spent that summer hiking the trails all over Oahu with our dogs. Me with Mana and him with his weimariner. We had the best time and Mana loved it.

After that summer things began to change. I got busier and didn't get to go out as much with Mana. Soon we got another dog, then another, then another. When you have 4 dogs it's hard to just take 1 out, the others go crazy. So more and more Mana had to stay home with the other dogs.

All too soon she started getting older and slowing down. Walks with her began to be much slower and much shorter. I noticed her going deaf followed shortly by cataracts. In no time she was almost completely blind. She developed arthritis in her hips and this started to become an issue. Getting up and down was hard for her though not impossible, she just had to go slow.

The past 2 years I knew we were approaching the end, I just didn't know when it would be. She spent most of her time sleeping. Play was no longer an option for her. She still enjoyed being around us though and still loved her food. I figured as long as she could move and eat, that was fine with me.

Friday night was completely normal. She ate her dinner and then headed off to bed like she always does.

Saturday morning was normal too. She got up, did her business, had a morning biscuit and laid down for a nap.

Yesterday evening when we got home from seeing The DaVinci Code, we found her collapsed on the front lawn. She seemed to be tired and dehydrated. I got her up and walked her to the back where she sleeps. She was walking really, really slow. Every single step was a struggle. We got her into her bed, gave her some water and waited. I checked on her every 1/2 hour or so. She didn't seem to be getting any worse but she didn't seem to be getting any better. By the time I decided we should do something the vet was closed. I decided to give it until morning and see what happened. We all went to bed.

Around 2 a.m. Mana started moaning like she was in pain, real loud. I went to her and ended up spending the rest of the night laying with her. By the time the sun came up I knew this was the end. Her breathing was getting extremely labored. She could not move anything but her head and she was almost constantly moaning. Somewhere around dawn I decided it was time to end it.

When hubby got up for work I told him to say goodbye to Mana, this was it. When the vet opened at 7 a.m. I called and they said to bring her in. The vet looked her over said her breathing was rattly (the death rattle??) and her heart was beating irregularly. I had made the right decision. So, as I stood there cradling her head they gave her the injection and she crossed over the Rainbow Bridge. Mana, I am going to miss you.
at May 28, 2006

I'm so sorry, Flo-- it's hard to lose one of our furry buddies. We let them into our hearts knowing that they'll almost certainly leave before we're ready.

That's real love, you know-- being willing to take on the pain of loss for the pleasure of a few years of their company.

Mana was lucky to have you for a friend!

Oh, Flo. I'm so sorry. I'm crying. Partly because you've lost a beloved pet, partly because I've had my own losses lately, and partly because I fear I may be facing another similar loss in the near future. My heart truly goes out to you.

Mana was very lucky to have you.

So sorry to hear about Mana. It is the hardest decision in the world to make. I lost my 15 year old Schnauzer a little less than a year ago. I miss the Alex Girlie dog all the time. But know...that special, tender place that we have for our furry friends feels vulnerable and fragile. It takes some time to get over the loss. As time passes we realize that these crazy dogs have taught us so much about love and loyalty, joy and true friendship. Whatever we have shared in their presence can never really be lost. My thoughts are with you. Be well.

I, too am sorry for your loss! I had to put my 12 year old border collie down a couple of years ago ad it was one of the hardest things I've ever had to do. I think of her often and remember her with lots of love but it was time to end her suffering and that was the only thing we had left to do.

I am so sorry to hear this. It must be very difficult for you right now. My sympathies go with you.

Oh, Flo! How terrible. Why does the right decision have to be so hard?

I'm so sad to read your post. It takes strength to make that decision. It's a decision full of love because you ended her pain.

You two shared many years together. It's going to be tough missing her and remembering those times. I'm sorry for your loss. She sounded like a great girl.

Time to step up the self care game

This group that I belong to has been holding a Revitalize week. This is a week where they are trying to inspire us more and restart some se...