So many things running through my head right now.

First, the fun stuff. Last night was packet pick-up for the Tinman (do not ask me why it was on a Wednesday night, it makes no sense to me). Anyway, most races here they don't give swag, you get a t-shirt and you'll be happy about it. So this is what we got: 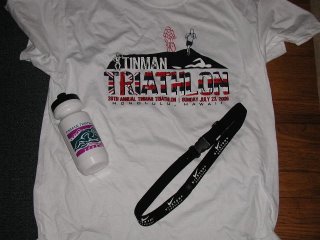 There is of course the obligatory t-shirt, who can't use another water bottle, and a race belt. I'm very excited about the race belt since I didn't have one and seemed to keep forgetting to pick one up. It's one of those things I would think about as I was getting ready for a race and then promptly forget it after the race was over, so I'm stoked.

There will also be finisher's shirts and medals - woohoo!!!!

In reading the race rules last night I got a little freaked out though. The start is in waves and I'm in the 2nd wave. That's good in that I don't have to wait long. That's bad cause there's 3 waves behind us. The swim being the hardest part (mentally) for me, I've begun some mind games. I have taken some of the things from WW and am applying them to this. I have a talisman that every time I touch I think how good a swimmer I am and how I do not freak out in the water. I'm also mentally picturing the swim and seeing myself swimming calmly and remaining calm throughout. I just need to get there early enough to have time to get in the ocean and warm up and get over the anxiety. I really believe I will do fine. Where the mind goes the body will follow.
_______________________________________

Swim clinic last night was awesome. The most important thing I've learned is that I am a good swimmer. I'm not that fast but I'm good. The instructor pointed out that on my recovery I tend to drop my left elbow and it actually hits the water before my hand does. I worked very hard to stop doing that and I'm having a hard time. It's almost like my shoulder doesn't move in the right way. It's weird but I'll work on it.

Which brings us to this morning. I did not want to get up but I forced myself. I've kind of moved into a taper. The way I figure is, the work is done, nothing I do now is going to make me any faster or stronger so I'm not risking injury. So I finally go up this morning and couldn't decide what to do, elliptical, yoga, pilates, what???? Finally I decided I really felt like a bike ride. So I headed off and just took it easy, I was just cruising enjoying the morning. A couple of things I noticed. My average speed, without really trying, was over 13 mph. Granted, that's not the speedyist ever but I wasn't trying. I was in the easiest gear the entire way, enjoying the scenery and just having a great time. If I had put the hammer down I could have averaged 14-15 mph, very cool. Also, I did 8.4 miles in 40 minutes. That's pretty good for cruising. I have never done that ride that fast with that little effort. I never even worked up a sweat. So that was good.
___________________________________________

I guess that's it. I have some other things running around in my head but they are not fully formed ideas and therefore not ready for publication.

It's all in the point of view

I have a terrible habit of seeing things in black or white. This or that. Yes or no. I struggle to not have polar opposite opinions. I also...