This covers a couple of things.

First, I have been very, very tired the last couple of days. It's either a) relief from the Rocco thing; b)PMS; or c) pure unadulterated laziness. I actually believe it's a combo of a and b.

Second, because of the first thing I have not been working out as much as I would like.

Third, I was soooooo craving pizza tonight that we ordered Pizza Hut for dinner. Now this is odd on many, many levels. A) hubby HATES pizza so we have it once every 5 years. B) we NEVER order delivery because well, Pizza Hut stinks and the really good places don't deliver. C) I've been eating really well and the pizza was not within my daily calorie allotment. Nor were the breadsticks. Or the cinnamon sticks. Or that icing - yum!!!!

Fourth, and this is the biggie, I may just be the new owner of one of these: 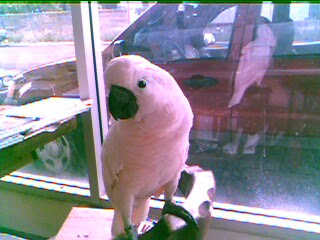 Not this one, this is my bosses. But a friend of hers got one about 5 years ago. They are having marital problems and the bird is only making things worse. In a moment of weakness I said I would take the bird off their hands if they wanted. This poor bird went through a divorce in it's first home and ended up relegated to the garage. These folks purchased her and now, 5 years later, they are having problems and the poor bird is taking the brunt of it.

So they asked if I could pick the bird up today but today was Rocco's surgery so it was not a good day. I will probably pick her up tomorrow or Friday. Now, I just need a good name for her. Her current name is Frodo but they don't call her that so I think it would be fairly easy to change it, I just have to be creative. So yeah, I did that.......

Rocco is home from the hospital. He's all dopey and just laying around outside while the guys play poker. The vet said the surgery went very, very well. They've sent the tumor off for biopsy and we'll know exactly what it was in about 5 days. Hopefully they got it all and the edges are clean so it can't spread. He also had a fatty lump right above his penis that I had them remove since he was under. This way that one can't turn into a mast cell tumor in 2 months and he has to have another surgery. So the poor boy has 2 incisions, one at each end of his body, poor baby.

Stress makes you tired and makes you want to eat bad, so give yourself the weekend for things to settle down and then you can get back on track. Hopefully all goes well with Rocco. Cute bird by the way!