We seem to have lost our tradewinds and it is bloody hot tonight. Looking out my window nothing is moving, there aren't even that many bugs around - it's too hot for them too.

In news from the birdie world, a while back I blogged about Kiko the cockatiel. 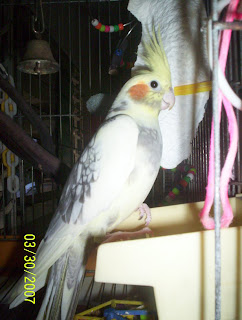 Kiko is about 18 months old and has become a chronic egg layer. Now there are a number of ways to deal with chronic egg layers. Most of the simple ones I've already tried and while they've slowed down her laying, it hasn't stopped completely. There is also medical intervention. I could take her to the vet and get hormone shots to stop the egg production. I'm leery of this for a number of reasons, the main one being she could quite likely die.

Since she started laying I've become a master at keeping her healthy. She gets a good seed diet so she gets enough fat and protein to support her. She always has 2 cuddle bones in her cage so I'm sure she gets enough calcium. She also has a mineral block, I don't want her to be deficient in anything vital nutrient. I also make sure she gets a lot of exercise. Her wings aren't clipped so I let her out and she flies around the house. Considering she once laid 20 eggs in about 5 weeks, she's very, very healthy.

Okay, my point here, and I do have one, is Kiko is getting a mate. I've been toying with the idea of getting a male for her. My reasoning, and I've read this, is that if she actually lays some eggs that hatch she will stop laying them so frequently. She'll get back on mother nature's schedule and lay once or twice a year. So that's what's happening.

A friend of a friend has 2 male cockatiels and they are fighting so she wants to give one away. I'm picking him up on Saturday. For a while they will live in side by side cages. If things look good I'll get a large breeding cage for them and they can start making babies.

I am not looking forward to having baby cockatiels but short of shooting her up with hormones I don't see another way.