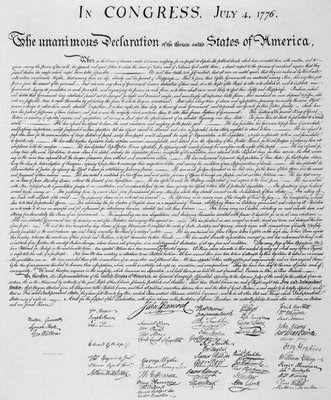 232 years later, these are still some of the most powerful words ever written by man. These 56 signers created one of the greatest documents of all times. Do you realize that by them signing this document they were risking their lives? If this independence thing failed, these 56 men would have been hunted down by the British. They would have been hanged until almost dead, then put on a rack where their joints would be popped out. Finally, they would be eviscerated and their intestines removed while they were still alive. That was the punishment in those days for what they were doing. Yet they did it anyway. They had the conviction and bravery to literally put their lives, and the lives of their families, on the line for what they felt was right.

232 years later we have the greatest country on earth. The US does more to help the world than any country in history. We give more money, food, aid to the people of the world than anyone else. We have brought more advancements and technology to the world than any other country. Many of the things we take for granted wouldn't be here if the US didn't exist.

Because of the freedoms granted to us by those incredibly brave 56 men, we can go places and do things that many people of the world can't. We are free to say anything we want about anyone we want, even our government. Many, many people in other countries have died for speaking against their government. We are incredibly lucky to live here. I know how lucky I am, do you??

This country is not perfect. Nothing run by humans will ever be perfect. But of all the choices in the world, this is as close to perfect as you get. I have lots of issues with the people involved in running this country. But, in spite of them, America is the greatest country in the world and I'm proud to be an American. Are you??

Think about this, God is mentioned 4 times in the Declaration. Do you think that would get past the Supreme Court today??

In 27 days, Congress talked about it, wrote a draft, debated it, and passed it. That's amazing. The Congress we have now couldn't get a lunch order together in 27 days. This is what it's like when you have the confidence of your convictions. When you have a moral compass to guide you. And when you have faith and belief in something larger than yourself. These men knew they weren't acting just for themselves but for the future generations of Americans.
at July 04, 2008

Wow, I didn't know all that went down in 27 days!! You're right: NOTHING gets done that quickly now days!