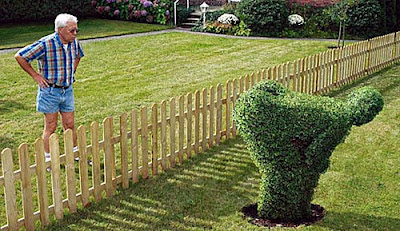 I would totally do this to my neighbor if my fence wasn't so high. I'm thinking of shaping something that looks like a finger and putting it in my window. But quite frankly I am done with them. Completely and totally done.

We got into it today and quite honestly it was totally my fault. But I don't really care, it was coming. It was bound to blow and today I forced it to go. And it went. Big. Like 3 cops big. In a bizarre way I'm kind of glad it did. I had been walking around for the last few days feeling like I was waiting for the other shoe to drop. Well, it fell with a bang today. We are supposed to have a mediation meeting on Monday and I'm over it. I don't give a rats ass whether it happens or not. I did talk to the other neighbor because she is involved just because we live so damn close together. She thinks now more then ever we need to have this meeting. And quite honestly, up until today I was really hoping that on Monday night we could settle this. I had some areas where I was going to try and make things better, like with the birds. Now I'll be damned if I'll tell them what I'm doing about the birds. I promised the other neighbor that I would go to the meeting and agree to listen, at this point I have absolutely nothing to say to the idiot neighbors.

The day started so nicely too. I had an unexpected day off due to a traffic accident causing a major power outage at school. That was really nice and unexpected. We went out to lunch and had a great time. When we came home from lunch is when all hell broke loose. I think I'm more angry because he caused me to lose it so badly. I should have rode above it and I didn't. Well, I will now. Monday I'll be riding way above it and probably be completely disengaged.

I'm wondering what the right way to go is. Should I stick it out or should we really consider moving?

Oh god, the cops just pulled down again. The neighbors called the cops again. I'm dying to know why since not a damn thing has happened since the cops left earlier. I can't wait to hear this. But I guess I won't hear about it. The cop spent about 30 minutes over there and then he just left. I guess if we had done something wrong he would have come and talk to us but he didn't. They probably wanted to make a report on some nonsense or the other. The cop has to take it but that doesn't mean he has to act on it. Frankly I just don't care anymore. I don't care if they file a million police reports. I don't care if they complain about everything we do. I just don't care. We have to get that deck built and that way we will be able to ignore them completely.
at February 21, 2012