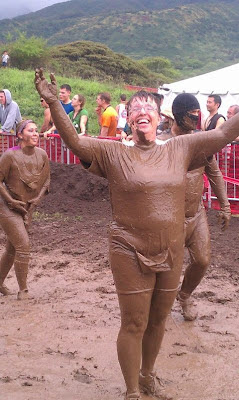 That was me at the finish line yesterday of the first ever Hawaii Warrior Dash. It was fun and I can not wait until next year. But let me back up a bit.

About 3 months ago I accidentally found out that Warrior Dash was coming to Hawaii. I had heard about these and was dying to try one. So in a fugue, I signed up and got a friend to sign up with me. As the day got closer and closer I realized I had not be training or doing much of anything, how the hell was I going to pull this off? But we went yesterday and decided to give it a go. I viewed it as the first one and therefore kind of a reconnaissance mission. Not knowing exactly what it would be like, I would do my best, do what I could and then prep for next year. Woo Hoo, game on.

As we were driving up, we had a 2pm wave so as we were driving in we could see people on the course, and the people we were seeing were not that muddy. Cool. Maybe it wouldn't be as bad as I thought. As we are waiting for our wave to start , it begins to rain. Then it begins to rain harder. By the time we hit the first obstacle it was pouring. So all those people we had seen who weren't very muddy just got lucky, by the 2nd obstacle we were a mess. It made walking very hard since the mud was very, very slippery. But we trudged on and on. I think it took us about an hour and 25 minutes. The timing isn't up so I'm not positive. At the finish line you have to swim through a mud bath under barbed wire, so when you stand up you look like the picture above. Awesome.

The thing was, it was really, really fun. I definitely want to do it next year, we plan on getting a big group together for it, but I also realized a couple of things. First, I need to train. Even though I ride my bike every day, I am so out of shape it is not funny. So training has become a real priority for me. Second, I like doing races. The whole atmosphere. The pushing myself to go further then I thought I could. Everything. I love it and want to do more of it. And thirdly, next year I am going to rock that dash. Rock it completely!!!!!

This morning I am sore all over. Legs, back, arms. Everywhere. I actually had to get up because I could not lay in bed anymore. So a good day, a good workout, and Monday it's time to get serious.
at March 25, 2012