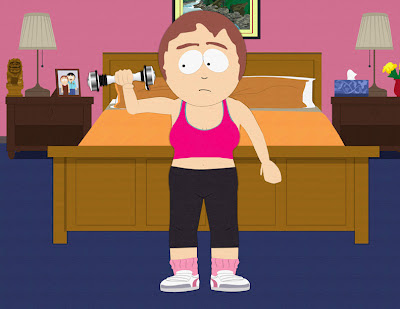 Yesterday was a really good day. I worked out for the first time in forever. I found a Tabata workout online and decided to try it. I have to say this about Tabata - I like it!! For those that may not know, which I didn't really until yesterday. Tabata is an interval method. You do a movement for 20 seconds then 10 seconds rest, repeat 8 times for a total of 4 minutes. Rest for 1 minute and move on to the next more. Why did I like it? Well, there is no time to get bored, you are constantly changing things up - either moving or resting. It's not hard in the fact that I can do anything for 20 seconds. You don't feel like you're working that hard, even though I was sweating like crazy, but it's easy to keep going. So I really like this method and will probably use it a lot. I also found a timer app that has the Tabata timer already set up. Yea!!!

There was a downside to this workout. By the end of the workout I could feel my muscles already starting to ache. Delayed onset muscle soreness started to set in before I was done with the workout. Yikes!!! That happened because a) you do the move 8 times for 20 seconds each, that's a lot of one movement. And b) I have not worked out in forever and am seriously out of shape. This morning I am sore. Really, really sore. But I kind of like it. It feels good to know that I worked my muscles and did something good for me. I want to work out this morning but I'm having trouble moving, so maybe just some stretchy yoga poses to get some blood flowing into the muscles and get this lactic acid out.

The rest of the day went just as well. I had hummus on flatbread with tons of veggies for lunch. A mango smoothie from Jack in the Box for a snack. Dinner was a delicious burger and beer with some friends. Awesome. I felt really good about yesterday and I like that feeling. I'm slowly making my way back to where I want to be and I think I'm going to like the journey.

Some interesting things to note. It's amazing how quickly these good habits can reassert themselves and how good choices lead to more good choices. After working out yesterday morning, I did not want to ruin it with junk food. I ended up eating pretty well and felt really good about the choices I made. Even the beer was okay because I really wanted one. I have some junk food laying on my kitchen counter and was not even tempted yesterday. So, the moral of this story is, one good choice leads to another. They build and build until the good choices far outnumber the poor choices.