I did a handstand 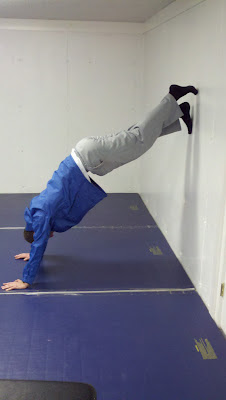 This is kind of what I looked like, though that is not me. I was a little closer to the wall and I held it for about 40 seconds. Awesome!!! I've been doing the Designer Whey Summer Shape-up Challenge and I am so enjoying it. Monday was a lower body workout. Tuesday was upper body. Today was cardio and core. It was provided by an MMA trainer and it was strange but I liked it. There were a lot of planks and sit-up type things, along with turkish get-ups, wall sits, and handstands. As I watched the workout video I thought there was no way I could pull this one off. It looked hard. And it was, but I decided to give it a go and I did it. The only move I could not do was the elbow - heel bridge. You rest on your elbows and heels, with legs straight, and raise yourself up. Yeah....not so much. I could only get about an inch or two off the ground and could only hold it for a couple of seconds. But hey, everyone has to start somewhere. But I was most excited about the handstand. I have not even attempted a handstand in probably 40 years, but I decided to give it a go. And I did it!!! Woo Hoo to me!!!!

Also, Designer Whey is having drawings for those registered in their Summer Shape up challenge and I won the first day!!! Woot!!! Don't know what I've won but I won!!! Woo Hoo!!!!
at July 11, 2012

I have been doing my back and hip challenge and it seemed to be really helping my knee. Then a few days ago I added in foam rolling. Now th...