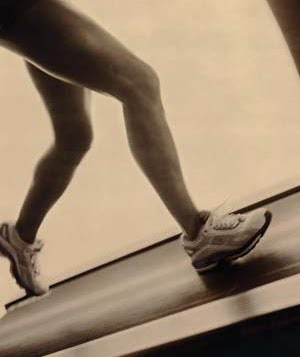 Yesterday I got on the treadmill and I ran for the first time in forever. I've been doing some running at Crossfit but that is always part of a workout. On Saturday we had to run 800m, then 400m, then 200m. But that is different because it's in the midst of other things like push presses and pull-ups and that running is ugly.

Yesterday though, I got on and ran just to run. I had decided to do 2 miles (no time of any kind), in any way that I could. I warmed up for 5 minutes then started running. My though was I would run until I was tired then walk for a bit, then run again, etc. Well I ran for 5 minutes straight. Wow!!! I then did some walking/running for a while and when I hit 1.25 miles I ran the rest of the way. It felt really good. And apparently doing Crossfit has helped my running since my legs/cardiovascular are much stronger then they were.

Now I'm going to try something that I've never considered before. Running every day. I've always played it careful, especially with running, because of my knees and possible injuries. But the way I'm looking at it now is, I do Crossfit 5 out of 7 days and it's not been a problem. I know we don't do the same thing every day, but I'm still working really, really hard. I'm going to start easy with the running. 2 miles a day for a couple of days, then 2.5 miles for a couple of days, then 3 miles, etc. And I'm not going to go crazy fast or anything. Right now I just want to get used to running again. One of the things they say at Crossfit and I've heard about other things, is if you want to get good at something - do it. A. Lot. Want to get good at squats??? You need to squat. Pull-ups??? Do them. Handstands?? Spend time on your hands. Swimming??? Get in the pool every day. So yes, running puts a lot of impact on your body but I think if I start easy when I get to the point where there are lots of miles, or I want to go faster, I will then ease back to 3-4 times a week. So that's my plan. For now run every day.

Also, 5 days a week of Crossfit. That's not going to change. And cooking/eating like a caveman. I have other things I want to do also. I dug out the camera last night and charged the battery so I can play with that. I've got some school planning to do. I want to do some major cleaning around here. It's going to be an awesome break.