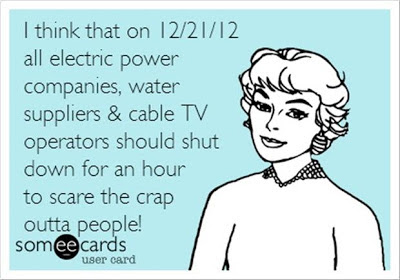 Damn Mayans!!! Got us all excited and worked up for nothing. Oh well, moving on.

I've been having some small groin pain on my right side and it's bugging me. I don't know what it's from or how to fix it. It's not bad enough to stop me from working out, but it's there. I'm wondering if it's from running on the treadmill. I didn't run yesterday but plan on running today.

Yesterday turned out to be an interesting day. I got up early to go to the post office and pick up a package and ended up not showering or getting dressed until 1pm. I spent the entire morning working on school stuff. It was good. I got a lot done. But it was weird for me. Once I showered and dressed though I got moving. Did a whole bunch of stuff around the house before Crossfit.

Speaking of Crossfit. I'm weird. I know that and completely accept it. One of the things I like about Crossfit - a lot - is the way it is structured. We start with a warm up, then we do some strength work - usually focused on Olympic lifting type moves - then the workout. That's the pattern most instructors seem to follow and I like it. I like being told what to do. If I knew what to do, and could do it on my own, I wouldn't need to go anywhere. But the Thursday night instructor is another story. First, he's kind of stiff and seems incredibly uncomfortable - so that's weird for an instructor. Second, he has up warm up on our own. He tells us we have 10 minutes to warm up any way we like. Then we never do any strength moves, it's always straight into the workout. He gives little feedback during the workout. Most instructors walk around and give hints and tips. Not him, he sits there. As you may have guessed, I don't like him. I had him last week for the first time and didn't like him, but I am sometimes quick to dislike things that are new. So I went last night to give him another try. No!!! Don't like him and I will not be going anymore on Thursday nights. If I really need to workout on Thursday I'll go to Kailua. On top of that, last night they were playing this insane techno music that was just driving me crazy. Techno music has the same beat no matter the song, and it all sounds exactly the same. By the time I left there I was getting a headache. I hate that sh*t. If that continues I will have to rethink my membership there and maybe move to Kailua permanently. So Thursday nights in Kaneohe are pretty much out for the foreseeable future.

My body is revolting again. For a while it was my ankle and knee. Now it's my groin and butt. Last night it was my mid back. That may have been due to the sit-ups we did, but still it was weirdly painful.