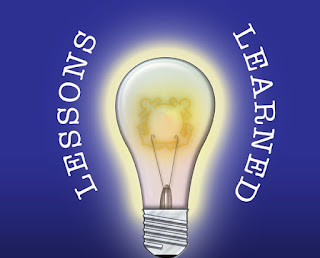 I just got back from Crossfit with a major AHA moment. Our workout today was as follows:

A number of things happened that lead to my AHA, so bear with me.

When I saw the WOD and that there was a run involved, my immediate response was OH SH*T!!!! I caught that and stopped it in it's tracks. I switched it to, it's only 200m - easy peasy. Then we had to do rebounding box jumps. Again, my initial thought was, I can't do these. I shut that down and said of course I can, I did them the other night. My next thought was, I will have to use the smallest box. I shut that one down too. The other night I used the smallest box and it was easy. I decided to use the next box up. While practicing on the 12" box, I thought it too felt kind of easy. So I tried the 16" box. Just right. Hard, but not impossible. Something I would have to work for. Perfect, I used the 16" box in my workout. Finally there was the toes to bar. I really wanted to do these but discovered that the kip hurt my shoulder. So then I tried a hanging knee to chest, but that too hurt. So I admitted defeat and did them on the floor. I was ready for the workout. I pushed myself through the entire workout. I ran all the running. I did the box jumps as fast as I could and I did the toes to bar without stopping. I pushed myself and finished it in 9:56. Not the fastest but definitely good for me. As I lay there on the floor recovering, I thought to myself that this was the first time I really pushed myself in a 21-15-9 workout. This is a short workout so it's supposed to be an all out sprint. Today it was for me and I felt really good about it. I've felt really good about my WODs lately even though I was doing less than I had previously.

As I was driving home I thought about that. I don't lift near as much as I did before my shoulder but I'm working much harder and feeling better about my workouts. I then thought on something the owner told me a couple of weeks ago, injuries are bad because you get frustrated about where you used to be and so you try to rush to get back there and hurt yourself more. Up until about 2 weeks ago, that was me. I was angry and frustrated that I had lost so much ground due to this stupid shoulder, so I tried to push things and ended up just getting more frustrated and angry. Workouts were not fun and I was not enjoying myself. So last week, when I decided to lose the excuses and just do the best I could was a real turning point for me. Since then I have been doing the hardest version I can without pain, and really pushing myself. What's happened is that I am enjoying my workouts again. I'm in a much better frame of mind. I'm not the last one done every single time anymore. And I'm making progress as evidenced by my push ups last night and rebounding on a 16" box today.

I think the lesson I'm supposed to get out of this is that I'm not in a competition with anyone but myself. Before my injury I was looking at what others did and trying to beat them and pushing myself too far. The injury set me back, but in so many ways has allowed me to see the path and move forward.
at May 04, 2013