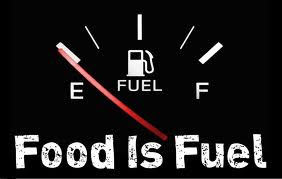 And I had that driven home today in a big way. I overslept a little bit this morning and would have had to rush like crazy to make CF at 6am. Then I sat down and started watching the CF games, the masters were going today. I decided that I would go to the 8am class and relaxed with my coffee to watch the games. Next thing I knew it was 7am and I was starting to get hungry. This is too close to class to eat anything substantial and I had nothing small I could eat. No bananas. No hard boiled eggs. Nothing. I grabbed a handful of peanuts, called it good, and headed out to CF. I must say watching the games really got me inspired. I did Diane, 21-15-9 deadlifts and push ups. Since my back is still tweaking a little from the deadlifts the last 2 weeks, I decided to go light. Light but fast. I did 100# and raced through that WOD. I was bouncing the weight off the floor and just going, going, going. I finished in 4:39. Woot!!! That's blazing fast for me. I rode that high out of the box and off to the store. After my purchases I was starving and headed home. I made a huge breakfast. After I ate I was tired. I put it up to my Diane speed and didn't think much more about it. Showered, dressed, and sat down to figure out what I was going to do And I realized, I wasn't just tired, I was exhausted. Like I could hardly keep my eyes open, exhausted. I sat down to watch the games and ended up falling asleep. After 30 minutes or so I woke feeling worse. I moved to the couch and went to sleep in earnest. About noon I got up and made lunch. I had some idea that this was related to not eating before CF so I wanted to get lots of good fuel in me. I ate lunch and felt no better at all. I laid back down on the couch and read for about an hour. After that I fell asleep for about another hour. I really felt like absolute crap. I was exhausted, I had a headache, and I just felt like curling up and sleeping. I had to get moving so I forced myself to start planning dinner. I'm on my own this week so I'm focusing on cooking and eating well. As I was looking around for dinner, I found a tub with a little bit of dulce de leche left. I had made it about 2 weeks ago and forgot it was in there. I pulled it out to dump and ended up eating the little bit that was left. Almost immediately I felt better. And I mean dramatically better. This got me to thinking about what I've eaten the last few days. The last time I had carbs outside of veggies, was Sunday lunch. Since then it's been meat and veggies and more meat than veggies. This got me to thinking about food as fuel. I can not eat only healthy. I have to look at the food to fuel the intense workouts I do. In those 4 minutes I did Diane, I probably expended more calories than someone at a global gym on the elliptical for an hour. I have to have fuel for that kind of intensity and this morning I didn't and my body rebelled. So I am having a big dinner with sweet potatoes and corn. Carbs to build up my stores. I have to remember - food is fuel.
at July 23, 2013