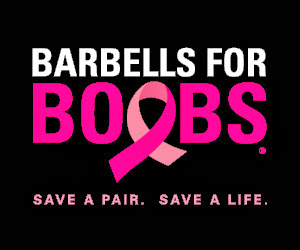 For breast cancer awareness month, October, the Crossfit community does barbells for boobs. Basically it's a workout you pay for and the money raised goes to breast cancer research. Last night our box did theirs. All the boxes came together at the main one, CFO, and 200 people did "Grace" to raise money for breast cancer. It was a blast. I got there just before 4pm and everyone was milling around waiting for the action to begin. At 5pm the heats started and we were off. I was in the 2nd heat, so I counted for another lady in the first. It is kind of nerve wracking standing around waiting for your turn. Finally it was time for heat 2. I was just hoping to not be the last one, I just wanted a decent time. And we started. One of the amazing things about Crossfit is that no matter how you are feeling, when the coach yells 3-2-1 GO!! It is on like donkey kong. The adrenaline gets you and you are gone. I was worried how I would do, but once we began I just took off. 65lbs from the ground to overhead, 30 times in 3:35 minutes. Awesome!!!! Every time I stopped to take a breather, there was a friend yelling pick it up, pick it up, plus I could hear all the other barbells clanking around me inspiring me to keep pushing. It was awesome. The best part was the last person still going ended up with a cheering section of 200 people. That is one of the best things about Crossfit. Being last means you have the biggest cheering section. It is awesome. No one is threatened by what anyone else does, because it's not a competition between people. It is a competition with who you were yesterday. Can you be stronger or faster than the person you were yesterday? It is awesome. They did the heats with the slower people going first, than the faster stronger people going, then, what they call the fire breathers went. These are the people who will do the workout, RX, in under 3 minutes. It was amazing to watch these folks. Strong. Fast. Truly inspiring. I had such a good time. And I PR'd Grace. Not a bad night. Can't wait until next year. 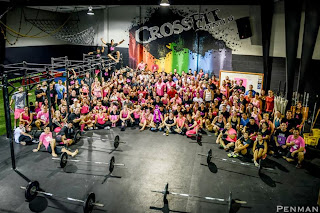