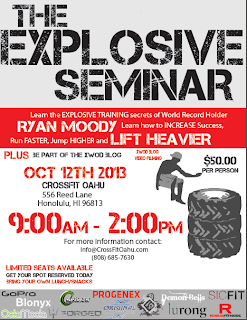 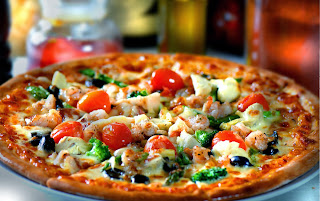 After this, a bunch of us went to a pizza place for some food and beer. It's a new place that opened recently and it's very, very good. I overate a bit, drank a couple of beers, and was generally feeling pretty spiffy. Came home and was too full to eat anything more, I did bring pizza for Hubby though, so all I had the rest of the night was an ice cream bar. I woke up this morning starving. Not hungry, starving. As in I felt like I was going to throw up bile if I didn't get something in my stomach. The kind of hunger that makes you grab whatever is handy and stuff it in your mouth. I could have stuffed some more pizza in my mouth, there is still some left over, but I decided to eat right and made a real breakfast. But this feeling got me to thinking.....

Pizza has a lot of stuff on it, but it is most crust. I bet if you did a weight comparison, over 50% of the weight would be crust. Crust is bread, which is wheat. One slice of a supreme type pizza is around 250 calories. I ate 4 slices. That's almost 1000 calories plus I had 2 pints of beer. That is approximately 1500 calories in one meal. A 6 oz steak has approximately 360 calories and I eat that with lots of veggies and maybe a small potato. A meal like that has about 500 calories in it and I do not feel starving when I wake up the next morning. The more I pay attention, the more obvious it becomes how food effects me. We really have been handed a bunch of bull about food and nutrition. I don't think they were doing it purposefully. I think it's more of a case where a little knowledge is a dangerous thing. They learned that carbs fuel our bodies and proclaimed that we must eat mostly carbs. They didn't have the full story. Nothing exists or works in a vacuum. The human body is an amazing, complex work that can adjust and adapt to many different situations, including what food can fuel it's systems. I just find it very amusing when someone says, this is what the body needs because XYZ, not taking anything else into account.

It's kind of the same way with people. You have a person that something worked for, weight loss, weight gain, confidence building, whatever. They stumble across something that works for them, then think that they can help others. Now it's nice that they want to, and their advice may help some people, but to think you are now an expert is just so wrong. One of my favorite examples is job hunting. Years ago I paid one of those services to help me find a job. Their suggestions? I get out and network. Go to meetings. Go to gatherings. Go anywhere business people are and network. That's an excellent suggestion. That is even something I'm sure works once in a while. What I have generally found though is people at a social event do not hire people. I've never seen it happen.

Anyway, not sure how I drifted off on this topic. I guess I've just been seeing a lot lately about people saying eat less to lose weight. I don't believe that is completely true, and could be harmful in the long run. But, what the hell do I know?? I only know what works for me :)