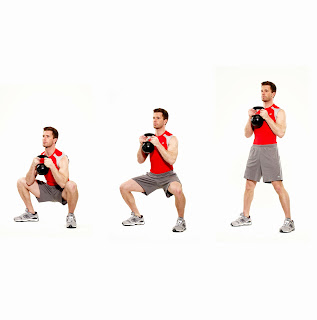 I don't normally do Crossfit on Sundays, it is one of my two rest days. But since I missed the last three days, Sunday it was. The coach on Sunday calls it Sunday Funday and he makes up with WOD himself. It is usually brutal and today was no exception.

Yes, it was as ugly as it looks. Apparently this is a workout the coaches did yesterday during rowing certification. Oh joy. The picture above is of a goblet squat because I had no idea what they were until I had to do 60 of them.

This would be a tough workout by itself, but add in the burpees and you take it to a whole new level. Then add in the fact that yesterday I ate garbage and my digestive tract is not happy with me, and that takes it to a whole new realm of ugly. But I got through it in 13:57 - I was driven not to do that last set of burpees. But there were some thoughts along the way.

It was hard and I was kind of feeling like crap. I was going to only do 30 goblet squats but I just kept going until I reached 60 - yeah me. The deadlifts were a slap in the face. I can deadlift 250#. I thought that 135# would be fine, but by the time I got to them I was exhausted. 135# was out of the question. So I dropped down to 90#. Ugh, that's low for me, but given the circumstances, I guess it's okay.