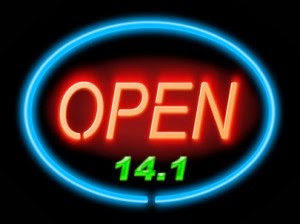 Today I did the first WOD in the Crossfit Open. 14.1 was a 10 min AMRAP (as many reps as possible) of 30 double unders and 15 snatches. My double unders are not great, before this WOD stringing 5 or 6 together was huge. During 14.1 I got 12 in a row and did 8 in a row a few times. When I was tired. That is huge. Really, really huge. People always say the don't do the open because they can't do the moves or they are not that competitive or whatever. This is a perfect example of that. I thought that the double unders would take me forever to get 30, but I did that. Twice. And almost 3 times. Then, some of the people who are really strong at my box, took forever to do their double unders. I scored higher than some of them because of the double unders. Amazing. Anyway, it's begun and for the next 5 weeks that's all we will be talking about. May the WODs be ever in your favor.

In other news, last night I did the final check in on the paleo challenge I was on. Lost 6 lbs of fat - yay - it was also my carb night for the new eating program I'm on. I had pizza - two huge slices- garlic knots, a margarita, and a brownie sundae. I was so incredibly full and sleepy. The weirdest thing happened though. When I first started eating I got cold. Like really, really super cold. Then I got really hot. It was like my body was using existing energy to digest all this unfamiliar food and when it realized there was a lot of it, my body lite the afterburners and I was dying I was so hot. Then I went to bed and slept like a baby. It was pretty awesome. But today it's back to ultra low carb for the next seven days. I'm already thinking about my next carb nite and what I might have.

Okay, enough of this. I need to eat some food. Clean up this room. Then start working on my school work, classes start on Monday :)