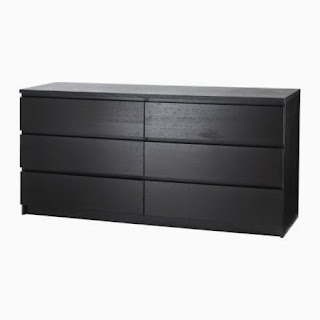 This is my new dresser. I'm very excited about it. It's an Ikea. We don't have Ikea here in Hawaii, so the fact that I managed to snag an Ikea dresser is awesome. It was not put together, so I did that. Anyway, this is part of a long, long story. I will try to make it as short as possible.

When we lived on the ranch, I basically became very depressed. I gave up trying to make things look nice and just went with what was there. I pretty much let Hubby do whatever, and while I love my husband, he should not be in charge of decorating. Plus he's a borderline hoarder. After we left the ranch, I got a little better and paid some attention to the home decoration but still, not a lot. I was happy to just have whatever and wasn't too picky about it. Since we have bought the house, that has been changing. Slowly. I want things to be nice, as nice as possible with 3 big dogs. I have a nice couch that I keep covered to keep it nice. I got a nice dining set. We did the kitchen counters so they look nice. We decorated the bathroom, it looks nice. The bedroom though has always been a bit of nightmare. We built this dresser thingee (not the one above) in the closet and it it very, very ugly. The other day, I took a TV and stand out of the bedroom and ended up painting the stand. Here is what it looks like now: 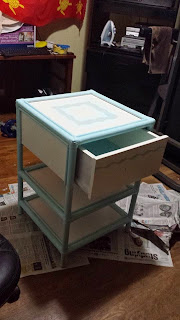 Originally I was just painting it for fun, I had no idea what I would do with it. Then, I liked it so much, I decided to make it my nightstand. I had been using an ugly, old, black end table that Nala had chewed the corners off - that tells you hold old it is. So I went and got a lamp at the thrift store and painted the lamp and the draw handle silver. It's in the bedroom and looks adorable. Well, that got me to thinking about our "dresser" in the closet. I hate that thing and started looking for a real dresser. Someone offered us this one and we jumped on it. I put it together yesterday and just got it into the room this morning. It looks awesome. Now, I still need to find a dresser for Hubby to replace that monstrosity in the closet. We will put the dresser in the closet but at least it will be a nice one.

So the moral of the story is that I have really gotten into decorating. Honestly, for a long time, I never saw the purpose in spending time and money on decorating. I figured any old thing would work. But I am finding the joy in it. I rearranged the spare room a few weeks ago and everytime I walk in there it makes me smile. Now that is what decorating is all about.
at April 18, 2014