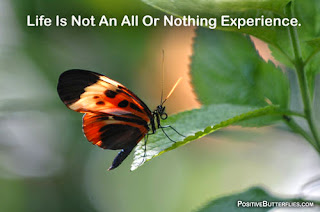 I think I've talked about this before, but for most of my adult life I've been a perfectionist. I have lived with all or nothing thinking. It has taken me a long time to lose that thinking, and I keep finding myself doing it, but I am getting so much better is it awesome. I can see and feel the changes it is making in me and I love it.

I am not the most organized person in the world, and I think that goes hand in hand with perfectionism - if I can't do it perfectly, I won't do it at all. But a couple of weeks ago, I cleaned off my desk and vowed to myself that I would keep it clean. Now, I wasn't perfect at this, and some days I would notice it had gotten completely out of hand. Instead of giving up - past behavior - I would just stop what I was doing and clean it up. Boom, problem solved. I had to do that a few times, but now I'm getting into the habit of putting things away when I am done. Still not perfect, but better than it was before.

A few weeks before break we started getting ants. Typical, there has been a lot of rain and it drives them in. The were coming onto the kitchen counter. So to combat this I started becoming anal about the dishes and the kitchen counter. No leaving any dishes, they have to be washed immediately and the counter cleaned every time it's used. Then I started loving how the kitchen looked. So I went out and bought a new dish rack that actually fit on our little counter (the other was too big but it worked)and that only held a few dishes at a time. No more living out of the dish rack. The dishes get washed and put away. Which necessitated a major kitchen clean up - which I did earlier this week. Now my kitchen is amazing. Clean and pleasant to use. So awesome.

During this break I had also rearranged and purged the spare room. A friend gave us some new bookcases (which Pinterest showed me how to paint last night :) and I got rid of a bunch of crap we had just been holding on to for no reason. It now functions as a great workout space and you can actually walk around in it. It still needs some organization, but, having lost the perfectionist, I will get that done in time.

So now that I have gotten my house in order, how to keep it that way? This is something I have been considering and pondering for the last two weeks. Then I remembered FlyLady. Now, let me say up front, I'm not a big fan of FlyLady because clearly she doesn't work outside the home and has time to do all this stuff during the day. Also the whole bless the house thing and swish and swipe. Yeah, a little too cutesy for me, but she has some really good ideas. Mainly that of having a cleaning list. Having chores that need to be done everyday, every week, every month, etc. I like that. Also, having morning and evening routines. I generally have these routines, but they could use some tweaking. So that is what I have been working on the last couple of days. As I've been cleaning and going through the house, I've been making lists of the cleaning that needs to be done in each room. From that list, I've decided if that item needs to be done daily or weekly or monthly. I'm not done but I have made great progress. I have lists. I am also losing the notion (perfectionism) that I have to clean an entire room at once. Why? Last night, before bed, I wiped down the bathroom sink and emptied the garbage. That's all. And the room looks much better this morning. Simple. So there you have it. My project over this break has been to lose the perfectionist and gain control of my house. I have found, in the course of my life, that once I have an area of my life in control, other areas start to fall into place. That has already begun to happen. Last night I sat down and did the bills early. Lately I've been putting them off because money is tight, but last night I faced the demon bills and paid them. And guess what, it wasn't as bad as I thought it would be. It never is. So there it is. My attempt to live in the kind of house I want to. Once I learn how to keep a house clean and neat, I'm going to work on getting new furniture - but that is a ways out. The only room I did not get to this break was the bedroom. That will be a challenge, but I'll take it a little bit at a time. No all or nothing thinking anymore - the perfectionist has left the building.