I have a terrible problem with procrastination and I think that feeds into my lack of organization. For example, I will see something that needs to be done and I will say, I'll do that later. That does a couple of things. 1) it puts off me doing - procrastination; 2) it adds to the disorganization because things are not put away; and 3) I believe, it adds to my stress levels because my internal to-do list becomes longer and longer. I came across an article the other day about this very topic, disorganization. Actually, the article was specifically about disorganization but I realize now there is a lot of other things that goes with that. Anyway, the lady writing the article talks about how she used to be very disorganized. She would see something that needed to be picked up or put away and say to herself, I'll do that later. Now to me, that not only adds to disorganization but also to stress. I know that I have to do 8 things in 3 different rooms and the longer I procrastinate the more they weigh on my conscious and raise my stress levels. Anyway, this lady came up with three little words to combat that. When you hear yourself saying 'later' you say, 'how about now.' Then do it. You are increasing your organization by putting away whatever needs to be put away. You are reducing your stress levels because that is one less thing you have to think about. And you are battling your procrastination head on. Back when I had my bout of severe organization, that is one thing that I did. I did not put things off, but did them as soon as I saw them. So if I was washing dishes and noticed that the back of the sink was dirty, I would clean it right then. If the bathroom was messy, I would take a minute and straighten it up. Even if I couldn't clean it completely, I did something to make it look neater. So those three little words are my motto. I think the hardest part is catching the 'later' but I've been working on it. When I see something and don't act on it I've been saying - out loud - how about now? and then doing it. It will take some work and it will not be easy. But it is a simple fix to a problem that really bugs me. So from now on: 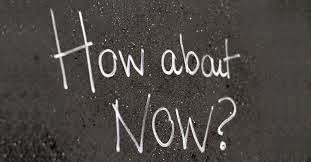 Note: the quote today at the top of my blog is: