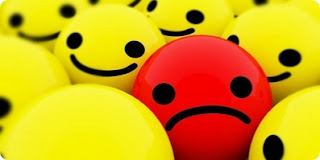 I realized years ago that I had a tendency towards depression. I don't get it as bad as some people, but I do get it. I feel like not doing anything. I spend far too much time sleeping, or watching TV, or just sitting. I spend far too much time in my own head. And I just feel sad. Well, it's happening again. The good news is that once I recognized it, years ago, it has become easier and easier to see coming. When I lived at the ranch, I swear I had been in a depressive state that had lasted years. That's when I first realized what was going on. Since then, I've become better and better at seeing what is happening. And this one I caught the minute it started. It began on Friday when I ran into the money obstacle. Friday I didn't do much of anything. Yesterday I didn't do much of anything. I napped. Watched TV. Went to bed early. That is one of my signs that it's happening, sleeping so much. I reach a point where I just don't know how to go on and so I sleep. Avoidance. My speciality.

So let's take a few minutes and really examine what would happen if I don't find a way to get the money. First, it would mean that I would have to suspend the completion of my Ph.D. Doesn't mean it's off they table, just on hold for a bit. What would that do to our moving plans? Well, we could move them up and year and go now - though not my first choice. They could also stay on track and do just like we planned. It would free up a lot of my time. I would no longer spend hours every day thinking about my dissertation. I could actually do fun things, like crafts, workout, take pictures. I could start working on getting the house in order by cleaning and organizing. Okay, the more I think about it, the more appealing it sounds to take a break from it. It would really not be so bad to take a break, focus on getting the house ready for the move, moving, and then picking up where I left off. I would be fresher and more ready to tackle it. Plus I would be out of here.

So, what have I learned from this little experiment? That this may be a gift in disguise. That it really wouldn't be so bad if I had to take a break from it for a bit. That yes, it will change things, but not necessarily for the worse. I always, always, always, say and truly believe that things work out the way they are supposed to. It may not be the way we want, but it is the way its supposed to be. And frequently: