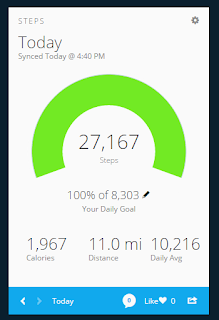 This is from the GAR today. I used to do this event every year. I did it for like 12 or 13 years in a row. But I haven't done it in a couple of years and a few months ago decided to sign up. I wanted to be running by now, but that didn't work out, but I have been training to walk it. As late as last night, I was questioning my actually doing this. I was thinking why am I doing this, why is this so important to me? And I think I found an answer. The first time I did this I was heavy and just beginning my weight loss/athletic journey. I had a crazy idea of doing a marathon and this was the first step in that journey. I also was around the same weight I am now and I was determined to lose it. So this was kind of like where my journey began. In many ways, I am back at that starting line and beginning again. I have let my weight get out of control. I am sore, knees hurt, back hurts, just like last time. So it was very much a rebirth of my athletic self and hopefully it will continue like it did before. No, it will continue because I really enjoyed doing this. Also, as I was driving to it this morning, I realized that I need this. I need a huge victory in my fitness. I haven't seen a whole lot of weight loss, which is due to my not being honest in my logging, so I needed a big win to boost my ego. I'm pretty sure that is what happened last time too. It was the GAR that got the ball rolling for me and I want that to happen again.

So today.....I set the alarm for 4 am so that I could leave here by 4:30 am. That all worked out. I ordered a breakfast sandwich and tea from Starbucks, swung by to grab that and headed over the hill. When I got to the stadium there was a line to get in. Huh??? That was a first. After parking, I headed to the bus and the line was unbelievable!!! I must have walked 2 miles just getting to the end of the line and then getting to the bus. Crazy!!! When we got downtown, I could not believe the sheer number of people. Here is a picture I took this morning: 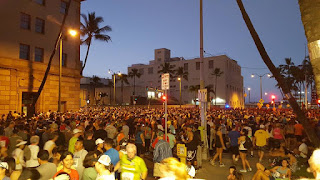 This was just in my little section of downtown. I saw bib numbers up in the 35,000 range. Ugh. It took 10 minutes to cross the start line. Crazy. I'm kind of glad that this is my last year here. I would be tempted to do this again and I don't want to. I remember when it was smaller and much more friendly. Glad I did it, but glad I won't be doing it again.

I wore my Hokas for this and they were great....except.....I got pretty large blisters on the side of each big toe. No cool. I also had a hot spot on the balls of both feet, luckily those did not blister and the pain is now gone. But man, what a pain the blisters on my toes are......UGH!! I've gotten calluses in the spots where the blisters are and I knew they were problem areas, I had no idea they were that bad. Now to figure out what to do...

After I came home, I jumped in a 80 degree pool for my legs. God, did that feel good. After I showered and dressed, we went out to lunch. Then it was home and a nap on the couch. Once I woke up, I felt better, but my feet really hurt. It's nothing super serious and they should be fine in the morning.

My goal was to complete this in 3 hours, but my secret goal was to finish it in 2:45. My chip time was 2:47 so I am saying I reached my secret goal. I would have hit 2:45 if it hadn't gotten so crowded once we hit the stadium. So I'm taking it as a victory.

That's about it. I have another post to write, but that may have to wait until tomorrow.
at February 15, 2016