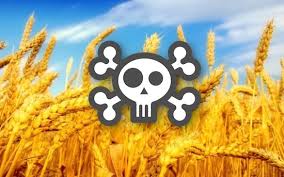 First off, this is in no way a vilification of wheat in general. I am talking about me specifically and the way my body handles things.

Yesterday I made a huge mistake. Huge. We went out to lunch and I not only had a hard cider to drink, but I ate a soft pretzel and some pizza. Worst mistake ever. So let's backtrack a little.

I started AltShift in September, 5 months ago, and in that time I can count how many times I've had wheat. Whenever I have had it though, I've had a little. A small piece of bread. A couple of bites of cake. Some small pretzels. Etc. Never have I sat down and ate a large amount of wheat on purpose. Also, within the last 2 months or so, I have had no wheat at all. None. So what made me think that I could eat a ton of wheat yesterday and not suffer the consequences?  I have no idea. But suffer I did.

First, I couldn't even finish my pear cider because it got way, way too sweet. I was wondering if it was because of the wheat that the sweetness increased???  I don't know but I couldn't drink it.

Second, I ate some of the pretzels with no problems. At. first. After a few minutes, I felt full. Really. Really. Full. One of the things I like about AltShift so much is that I never get that full, ready to explode feeling. Well, I got it again yesterday. Then I had agreed on pizza. I ate one slice and felt so damn sick. I stopped eating. I tried to eat a wing or two, but just couldn't. Ugh!! I felt bad. Then I got a headache. Either from the wheat or the alcohol, I'm not sure but it sucked.

I came home, laid down, and took a nap for about 45 minutes. After that, I felt much better but I did not want to eat. So I never had dinner last night.

The moral of this story? For me, wheat does not work at all. I just need to avoid it or, at worst, have it in very small amounts. I'm also thinking that alcohol is pretty much out of the equation now. I feel really good without it. I have fun without it and I never feel crappy the next day. So, stick to the shifts. Stick to what works for me and screw all that other stuff.

Which makes me think, do other people feel crappy all the time and just not know it? I know that I did and the only reason I can tell is because I stopped eating all that stuff. So I wonder if people would just give AltShift a try, they really might feel better.
at February 25, 2018