Our air conditioner died. Friday night I was sitting at my desk when I heard this weird noise. To me it sounded like steam hissing out of a pipe. I walked around and determined it was coming from my AC intake vent. Called Hubby over and he listened. We decided that it could wait until morning. If it had started 10 minutes later, I would not have heard it until morning anyway.

So morning comes and I call the repair company. They are really, really busy that day and want to know if I can wait until tomorrow. Ummmm, I don't know. My AC is making this weird ass noise and I have no idea if it's going to blow or not. So I have no idea if it can wait. So she agreed to put me on the list for today and we waited. Around 3:30pm I get a call that the tech is on the way. Yay!!! He gets here and comes in and listens to the noise. Hmmm, he says, that doesn't sound good. He then heads out to go on the roof and look because that his where the AC unit is. After a little bit he comes down and asks how long we've lived here. We tell him 3 years. He tells us there are a lot of problems with that AC. It is installed incorrectly (now that doesn't surprise me considering some of the things we have found in this house); the inner coils are coated with all kinds of crap (that's a story about filters which I'll get to in a bit); and it's leaking water into the electrical part. The noise we are hearing is basically the motor in its death throes. Awesome. He said we could fix it, but the motor would have to be special ordered and he had no idea how long it would take to get here. Double awesome. Oh yeah, and it would cost us around $5,000. Triple awesome. We could buy a new one with a 10 year warranty and have it installed by Tuesday, plus because we are program members, we get a 10% discount. Yay. So $12,000 later, we have a new AC on order and just have to wait it out till Tuesday.

So that all happened on Saturday afternoon. The service guy said that we could run it but it was going to die. And it did just that on Sunday night. I went to bed on Sunday night and it was making a new noise but it was still running. I woke on Monday and it was no longer running just making a clicking noise. Awesome. Luckily it had been pretty cool overnight, and apparently the AC had worked a little overnight, so the house was cool and remained cool most of the morning. By about noon though the temp was creeping up. We brought the AC unit from the bedroom out into the living room just to have a little coolness. It didn't do a whole lot because this area is much, much larger than the bedroom, but it helped some. We spent more time in the pool yesterday than usual, even went for a dip after dinner. Woke up this morning to a very hot house, it was hotter in the house than it was outside. It was rough.

Thankfully, at 6am, there was a truck in our driveway dropping off the new AC unit - Woo Hoo!!!!  Then at 8:45am I got a call that the installers were on the way. Woot Woot!!!!  Behind them came the crane truck. In no time at all they were pulling the old one down: 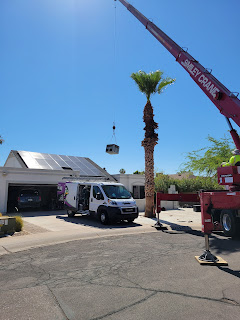 And then the new one was going up: 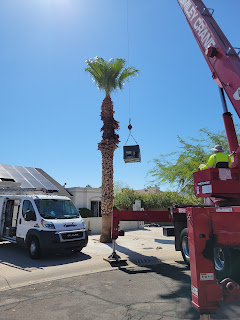 The crane is now gone and they are up there hooking it all up. Its kind of magical to me that they can hook up this machine on my roof and it will blow cool air into my house and make it livable. Magic, pure magic.
So that is the saga of the air conditioner. In the overall scheme of things, not a big deal. We caught it early and were able to get it fixed quick, but definitely a pain in the butt. This adulting thing is highly overrated sometimes.
at June 28, 2022