It was 10 years ago today

that Princess Diana was killed. 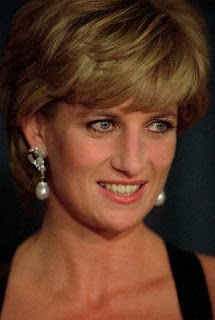 I have been a huge anglophile my entire life. I started reading about the royal family when I was like 12 and have been doing so every since (real books, not tabloids). I have read the histories of most of the kings and queens. I have followed the lives of the current royals with absolute fascination. When I was about 15 I used to say I was going to marry Andrew since he wasn't likely to become king, the queen might let him marry an American :)

I was fascinated with Di from her first photograph as Charles' girlfriend. I followed her story faithfully. I remember getting up at like 2 a.m. to watch their wedding live. I remember thinking, "she did it. She got the fairy tale ending Disney told us about. She absolutely got it!" Well, things didn't quite end up a fairy tale for her and her life ended all too soon.

The day she died is like the day Kennedy was shot. I remember exactly where I was what I was doing and how I found out. My sister had called me on my cell phone. I absolutely refused to believe her until I could get to a TV and see for myself. I remember seeing her boys and just aching for them. No child should lose their parent no matter who they are.

After her death I was not so interested in the royal family. I'm more interested now since the Queen is so old, Charles has remarried, and William is now of age. I'm curious to see what will happen with the monarchy. Who will inherit the throne? Charles or William. I've said for years, and I still believe, it will be William. Charles is the man who won't be king, and I think he's known that for years now. Anyway we'll find out soon. The Queen is getting older and I'm sure a decision will be made soon. Maybe she's waiting for William to marry and settle down. Who knows?

Okay, enough of that. We will resume our regular triathlon talk tonight. Tomorrow begins my new training program for my November tri. Tonight I will post my intended schedule and plan for the next month. Tomorrow is Sept 1, I love new beginnings :)
at August 31, 2007