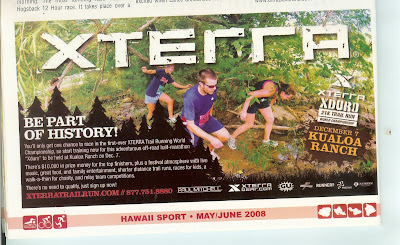 I was reading the local race mag at lunch and a small ad in the corner of a page I wasn't reading caught my eye.

At first I thought it was an ad for the Xterra qualifier held on Oahu every year in August. Then I notice it says BE PART OF HISTORY! and that's it's on December 7th not in August. Well, that made me stop and take a look.

Turns out it's the first ever World Championship for the Xduro series which is basically trail running. It's a half marathon and for this one you don't have to qualify to enter. I'm seriously thinking of doing it. I love trail running but I stopped doing it around June 2005 because I had a bout of sprained ankles. It was ugly, I was spraining both of them every time I ran, it was bad!! Ever since then I've been all freaked about trail running. Maybe it's time to try it again. I'm much stronger then I was 3 years ago and, even though I don't weigh any less, I'm really in much better shape. I may have to give trail running a try and see. Then I just might have to sign up for this. How fun.
at May 09, 2008

really the only notoriety in endurance sports now is doing the INAUGURALS.