So, now that I've made the decision to get an elliptical - the hunt is on. I haunted Craigslist and found a couple of possibilities. I had also stopped at Sears and looked at what they had. They had a nice Preform on sale for $249, regular price was $565. That was a pretty good deal but they had none in stock and wouldn't be able to get one until 8/29. And this was a close out so it's possible there were no more left already. Hmmm.....bummer.....

Then, over on the side all by itself, I see this nice elliptical. It had a tag on it for $199. Huh???? I asked about it and the lady said they lost the power cord so you could only use it manually. Initially I said bummer, and walked on. Then I thought about it, went back and got the make and model number.

Last night I went on line and found the manufacturers website and found the cord. It was $30. Sweet. I'm getting an elliptical. Then, as I'm trying to order, I noticed the drop down menu of states has no Hawaii. They don't ship to Hawaii. Bummer.... They were closed as they are located in the Midwest, so I couldn't call them.

This morning I jump on the phone and, after an eternity on hold, got to talk to a live person. I told him my story of Sears and the lost cord. He said they would ship to Hawaii it is not a problem and he would take the order. He is taking all the information and then asks me to hold on a second. When he comes back he tells me that their warranty is that if anything is not in the box when you buy it they will replace it for free. I said, but Sears lost the cord. He said that is not your fault and I will send you a new cord for free.

I then called my husband and told him to hustle his butt over to Sears and snag that puppy. He got the guy to take another $10 off the machine so I got it for $189. 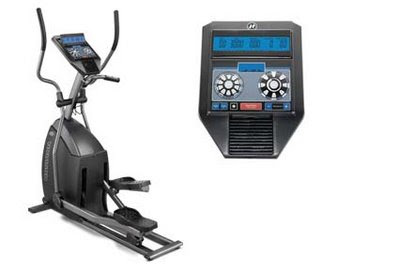 This is it. It's a 2007 model but it's brand new. In looking over their website their cheapest treadmill is $800. So if it is the lowest model that's still a heck of a deal. I'm very excited and can't wait to get the cord. I'm sure it will be here next week. Once I decide on something it doesn't take me long to find a deal. So I'm very happy and will now spend the weekend rearranging my workout space :)
at August 08, 2008

Ellipticals are the best for home exercise! Enjoy :)

That's nice that they're sending you another chord at no cost! What a great deal. :)