Maybe it's time to start faking it.... 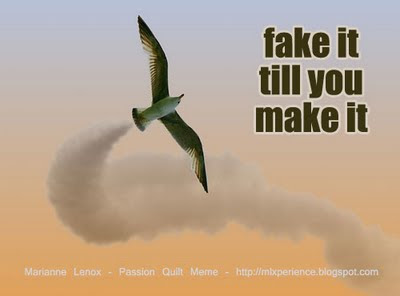 When I began this weight loss and health journey I started on the outside. I was sick of being fat and tired and was determined to make a change. I had read somewhere about how acting like you want to be will help you get there. So I started doing that. It was really little things like doing my nails and dyeing my hair. Nothing earth shattering, but little things to make me feel better. It helped. I felt good because I looked good and that inspired me to move and eat right. It became a self-fulfilling prophecy. I think that was one of the reasons I was so successful. Also, I bought new clothes. Well, the clothes became a completely different obsession but that's for another post.

Lately, I've been spending a lot of time in large t-shirts and baggy shorts. I haven't dyed my hair in months, I haven't cut it in months either. I think it's time to kick it up a couple of notches. Tonight I sat and did my toenails. This weekend I'm going to get a haircut and then dye my hair. So instead of sitting around reading about things like creatine supplements, it's time to start taking action. I may not feel as good as I'd like to, but it's time to start faking it until I feel it.
at May 23, 2011

Well actually, the little things will really make you happy with yourself.. Until it becomes a whole.. Why dont you check at our site! We have lots of great advice! http://www.spokanefitnesssecrets.com/

In my experience, many people are unable to stick to their exercise plan because of their tendency to postpone working out. In such cases, teaming up with a close friend to exercise daily is helpful. It is easier to stick to the exercise than think up excuses to avoid it.