Conquering fears and being a loser 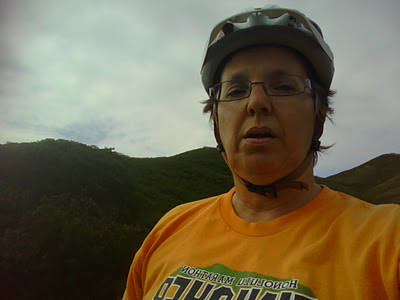 8 weeks ago today I crashed on my bike. It was pretty bad and I was in a lot of pain for awhile. Of course, all things considered it was not a bad crash at all which is what scares me. If I was in that much pain for that long and that wasn't a bad crash.....what would a bad crash be like? It took a long time for some of the injuries to heal. I have a scar on my arm that was probably the worst injury and I'm sure it will be there forever. For the last month or so I've been wanting to get back on my bike. But every week I find an excuse; it's too hot, it's too cold; it's rainy; it's windy,I overslept, etc. The truth of the matter was, I was scared. I was afraid to ride again because I was afraid to crash. My little crash caused a whole lot of pain, I didn't want to take the chance and have a worse crash. So I've been finding reasons excuses not to and that wasn't hard at all. Well, this morning I found myself wide awake at 5:30 am. It was not windy and there was only a little, morning rain. None of my excuses would fly this morning. So I got ready, got my bike out, and headed off to Weight Watchers. It was scary going I tell you. But I took my time, rode very conservatively, and it was great. I didn't take my mind off what I was doing for one second. I was so focused it was insane. But I did it. When I was getting near the intersection where I crashed I started getting a little anxious, but I went through it no problem. I do have to say that I did things I felt were safe but were not necessarily following the bike laws. I used some crosswalks to cross streets when I didn't feel comfortable going with traffic. I rode on the sidewalks a couple of times. But I was careful and safe and I'm glad I finally did it and my fear has been conquered.

Now, as for being a loser, I am :) I was down 1.2 lbs. Yeah!!! Considering the week I had, this really surprised me. I haven't worked out all week. Eating was not the best it could be, but I'm getting really intuitive about the eating. I did have dessert one night but basically I eat decent amounts during the day and stop eating dinner when I'm full. Some nights that's a lot of food and other nights it's just a little. The point is I'm paying attention and able to realize that I'm full and stop. When I do that I do not feel stuffed and bloated. And apparently it's paying off. Down 1.2 lbs Woo Hoo!!! Now this week I'm definitely going to track and work on getting my workouts in. I'm going to get up in the mornings and do my bootcamp even if I only get one round done. It's better than nothing. A girl at WW today said she gets and hour exercise every morning no matter how early she has to get up. Hmmmm....maybe I need to shift my thinking....
at January 21, 2012