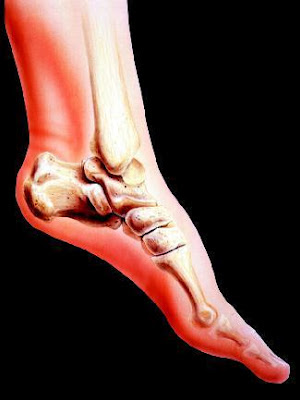 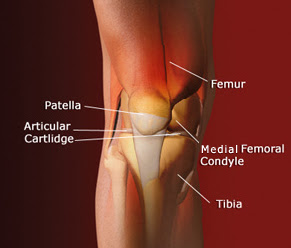 See the things that are labeled cartlidge? I don't have those. I had them removed almost 40 years ago, 37 to be exact.  So I have bone on bone going on. Have had for years. 99.9% of the time it does not bother me one little bit. But when it does - OMG!!!!

So because of the ankle pain, the knee pain followed.  Initially I thought it was from Zumba and weights and running and generally getting off my ass and moving. But it wasn't really getting better. At least not a lot better. I had started wearing my orthotics because I thought they would help the ankle - and they do.  But still the pain persisted. If I tried to walk in no shoes I had ankle and knee pain and it was not fun. Interestingly enough though, it did not bother me when I ran yesterday....hmmmm...

So I was thinking about the pain I'm having. I know I have crappy joints, I have no cartlidge in my knee and I've sprained my ankle so many times I'm sure it's spaghetti in there.  For a few months I had been taking Osteo Bi-Flex and my joints had actually felt pretty good. Then I stopped taking it for some reason. Maybe I just ran out and forgot to buy it and eventually it just slipped my mind, whatever. I haven't been taking it. So yesterday, after running, I popped into Longs and they had Move Free on sale.  After comparing it to Osteo-Bi Flex, I decided it looked good and bought some. The instructions say to load for the first 6 days, taking twice the normal dosage. I have now taken four doses and my ankle and knee doesn't hurt. Hmmmm....  Could this really be what was wrong?????  I'll let you know in a couple of weeks.

In other news, I'm really being adult about a lot of things. I'm facing things I have been afraid to face and am feeling really good about everything in general. The next item on my list is to get some life insurance. I have been saying that for years now and I keep putting it off because I don't know anything about life insurance. I'm just going to go online and try to find somecheap life insurance and be done with it. I'm tired of this weighing on my mind and driving me crazy.
at June 17, 2012