For the last few days I've had tons to say about all kinds of stuff. Then yesterday {crickets}...... What happened? I honestly don't know. I wasn't that busy but I did have stuff to do all day, I guess I just never got around to blogging. Oh well... I do have lots to say today, so let's begin.

I have to say I am feeling awesome!! Just Awesome!! I've been forcing myself to be more active and I'm beginning to really get into it. Let me explain. Yesterday I ended up sweeping and vacuuming the entire house because I did not feel like sitting while watching TV. Today I had a doctor's appointment and Hubby said he would pick me up. Instead of calling him, I rode my bike about 5.5 miles to the bus stop and caught the bus home. Cool huh??? It was for me. It is a definite shift in thinking and I'm digging it.

Other things, I'm sleeping pretty good. The eating is really starting to fall into line too. I had a cookie in my hand ready to eat, and I ended up putting it back. I'm feeling so fabulous in just the few days I've been doing this, I don't want to stop feeling this good.

The bad news is I may need surgery. I've had carpal tunnel syndrome for years and it's starting to get worse.I had the nerve conductance study today and I have it in both hands but the right is worse. That's the one that bothers me. I don't like living with this pain but I'm not big on having the surgery. At least not at this point in time. I have too much to do this summer and I don't want the excuse of not being able to work out. No now. I'm thinking I'll put the surgery off until Christmas vacation. By then I should be well ensconced in my workout regiment and should be able to handle a reduction for a couple of weeks. I know I'll be able to do cardio things after a couple of weeks, but that it may be a while before I can lift weights or anything. After all they cut a ligament: 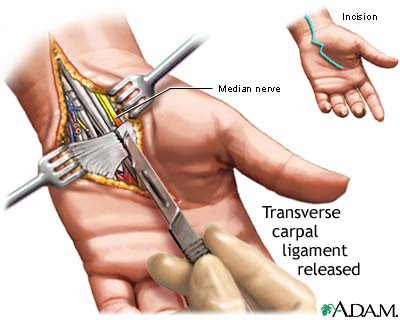 That has got to be painful and take a while to heal. I also wonder if it grows back together??? Hmmm... Something to ask the doctor. It's kind of like cutting open a wire duct that's not big enough for all the wires it holds. So they cut that ligament and it creates more space in the "tunnel" which in theory will allow the nerves to work like they are supposed to. And right now the very tips of my thumb and forefinger are almost constantly numb.

In a bizarre twist, my bike is actually not bothering it. I have to stretch it by bending my hand back towards my elbow, upwards, and that's the position I ride my bike in.