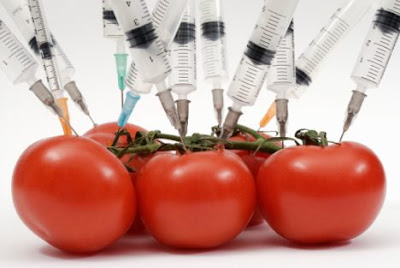 I have not given a whole lot of thought to this topic for a number of reasons. First, humans have been genetically modifying foods and animals since time began. Breeding only sheep that produce lots of wool. Breeding dogs for their looks or their tendencies. Breeding corn so it would last long, resist bugs, grow in winter, etc. As a scientist I see that we have always been modifying plants and animals. Humans modify everything they can. So that was my thoughts, we are not doing anything new at all.

What bothers me is why would the companies that do this not want to label it? That immediately raises a red flag in my mind. If you are not doing anything underhanded or anything that you wouldn't publicly talk about, why are you doing it? That's what bothers me. In what ways are you modifying this food and why is it such a secret???

As I make my way towards health and fitness I find this troubling. If I'm eating a tomato, I want to know it's only a tomato. I want to know that it's not loaded with chemicals and antibiotics and other nonsense. I buy most of my produce at a farmer's market or our local market that buys local produce, so I'm not too terribly worried about it. I'm also slowly making my way towards organic food, but it's a slow process convincing my husband that it's worth the extra money. He looks only at the money.

Anyway, in spite of being a scientist and not being against GMO foods, I am against people trying to hide things. So I think everyone should support Prop 37 in California. If California starts labeling GMO's the rest of the country will follow. And while I'm not against GMO's just to be against them, information is power and the more information the better.
at October 28, 2012