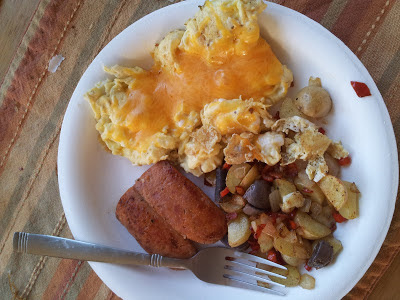 I've decided to do a weekly update on the Paleo eating since I know I will forget.

Knowing that I was seriously considering the Natural November challenge at my gym, I decided last weekend to give Paleo a try and see how I like it. I started on Sunday and did it through Wednesday. It wasn't bad. Initially I felt very hungry and I realized that since I wasn't eating wheat, which not only filled me up but gave me gas, I needed to eat more of what I could eat. I made some recipes that I had found online and they were pretty good. I took some recipes I found online and doctored them up for me. They were good too. It is difficult getting used to eating this way, but not impossible. It requires a lot of planning. I can not allow myself to get hungry without some food around. I can see how easy it would be to get off track. So no winging it.

Sunday, the day I started, went pretty well. I felt pretty good all day. Monday was also okay. I was hungry but overall felt good. Tuesday was another good day, I was starting to get the hang of eating more of the good stuff. I also noticed on Tuesday that I had not had that bloated, gassy feeling in days. Yeah. Tuesday night I went and registered the November challenge. At that time I weighed 193.6 and had a body fat of 39%. I was a little disheartened by the way the girl acted towards me. She was kind of dismissive and I felt kind of ignored. Possibly it was me, since I tend to think others are judgmental about my weight. So that feeling may or may not be true. What it has done is serve as an external motivation. I want to prove her wrong (these judgments may or may not be hers)and that is helping me focus on doing the challenge well. I did go home on Tuesday night and indulge in the poker ritual of fried foods. And then topped it off with some ice cream straight from the carton. Wednesday is where things started to go off the rails.

Wednesday morning I walked into my classroom to discover I had a fire in the trash can overnight. This set off a series of events that I'm not going into here. Suffice it to say, by the time it was over I was an emotional wreck. My trash can had melted to the floor, destroyed 6 tiles, and burned through to the asbestos underneath. Oh, and we were having a fire inspection on Friday. Yeah. Due to the principals mercurial temper, I had no idea how she was going to react to this event and I was quite honestly afraid I might lose my job over it. Also, I was just kicking myself for letting it happen and pissed that I wasn't more cautious, blah, blah, blah....... It turned out fine, but my emotions had already been on a roller coaster ride by 8am. That set off a day of junk eating. I had already decided to indulge a little since I knew the challenge was starting on Thursday, but this event really sent me over the top. I had Starbucks oatcake for breakfast. I had a cupcake with lunch. I had a handful of Halloween candy in the afternoon. By the afternoon I was exhausted completely and totally drained of all energy. I got a ride home from work because I did not think I could ride my bike that's how tired I was. I came home and took a short nap and in spite of the junk food and exhaustion, headed out to Crossfit. That night I worked harder then I have since I started. I really pushed myself and completed a workout that was brutal. 31 rounds of 5 kettlebell swings and 5 medicine ball cleans. That's 155 of each. That is a lot!!!! I came home and had dinner, which I don't remember, and ice cream and cupcake for dessert.

I woke up on Thursday morning exhausted. I could hardly get out of bed. This was the day Paleo starts for real. I ate pretty well that day, though I was hungry a lot, and tired. I was really, really tired. I came home and fell asleep before dinner and later on I fell asleep again. I headed to bed kind of early.

On Friday I woke up feeling pretty good. I had tons of energy and was looking forward to the day. It was my really busy day, with 5 classes and few breaks, but I was still looking forward and ready to tackle it. I ate well but by 2pm I was exhausted. Again. I almost fell asleep on the bus home. I came home and was planning on taking a nap and see how I felt for Crossfit, but I was so incredibly sore from Wednesday that I didn't think I could do it. So I napped. After dinner I was not only tired but kind of down. I did not feel like doing the Color Run on Saturday and I just wanted to crawl into bed and sleep for a week. I went to bed fairly early again.

I woke on Saturday at my normal time and was feeling okay. Still didn't really want to go to the Color Run but I had a friend going so felt obligated to. Once I got moving and on the road, I started to feel better. The run was fun and I'm glad I went. When I got home I was tired, but tired from activity not exhaustion. After a shower and some food, I took a nap that felt so good. All afternoon I was antsy and felt like doing something but really didn't have the motivation to do anything.

Then there are the headaches. I had a headache on Thursday, Friday and yesterday. Friday I woke up with a headache. They say it's from your brain switching from sugar to fat as fuel, all I know is that it's annoying and I want it to end.

So I want to document all this so that at the end of the month I don't jump back into my old eating habits and have to go through this again. Because I really do feel like crap and can not wait for this to pass.

The really exciting good news is I'm down 3lbs since Tuesday night. 3 freaking pounds. That is unbelievably amazing. I am astonished and completely blown away. Especially since I'm eating meals like the one above. Meals that I would have felt guilty eating before. So there is some good to all this.
at November 04, 2012